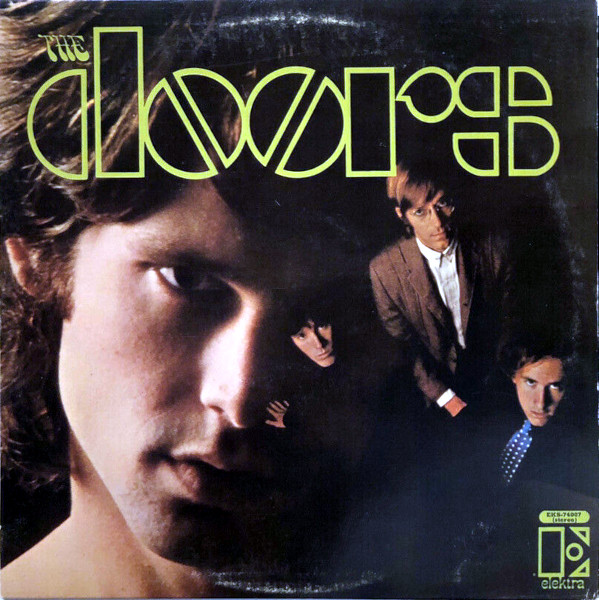 Meet the Beatles? Bah! Show me The Doors if you’re looking for the best rock & roll debut.

Kronomyth 1.0: The man who comes back from The Doors will never be the same.

Nineteen sixty-seven was a breakthrough year for psychedelic rock and roll: Surrealistic Pillow, Sgt. Pepper’s, Disraeli Gears, Mr. Fantasy, The Velvet Underground & Nico. And it all started with The Doors. Released in January, The Doors’ debut album sounded like nothing that came before it: nightmares and poetry and disembodied sounds cooked into a boiling stew of blues and rock and roll. The band never bettered it, instead refining their unique sound over several albums before Jim Morrison imploded.

The group took their name from Aldous Huxley’s The Doors of Perception, which chronicled the author’s early adventures with mescaline. Indeed, there is a strong hallucinogenic component to the music of The Doors. What is The End if not a psychedelic trip rendered in sound? It would be tempting to pin The Doors’ achievement on Morrison alone. No one, not even Elvis Presley, commanded attention the way that Morrison does. He is the lightning rod for nearly every electric moment on this album. But the brain-searing organ of Ray Manzarek, spectral guitar stylings of Robbie Krieger and, to a lesser extent, deferential drumming of John Densmore are crucial elements in the incantation. Without them, the spell eventually fizzles.

The album gets off to a powerful start with Break on Through (to the Other Side), a calculated introduction into their frightening musical world that begins with the portentous opening line, “You know the day destroys the night / Night divides the day.” All taboos are broken right there as we’re loosed into a chaos where day and night, id and ego, are at war with themselves. What follows are half a dozen songs, any one of which could be called a classic. Soul Kitchen feels like black magic, The Crystal Ship is a waking dream, Twentieth Century Fox casts Morrison in the role of sensual shaman, Alabama Song is perfectly macabre. The first side ends with Light My Fire, a brilliant effort from the entire band that stands as one of rock & roll’s greatest songs. (Rolling Stone ranked it at number 35.) All in all, an absolutely perfect side of plastic.

Side two opens with a mind-shattering cover of Willie Dixon’s Back Door Man. You would have to look forward to Led Zeppelin to hear a Dixon song played with such intensity. The album loses some of its dark energy toward the end, only to send listeners spiraling into the black hole of Jim Morrison’s Oedipal nightmare with “The End.” One of the most powerful rock songs ever recorded, it makes The Velvet Underground’s “The Black Angels Death Song” sound like child’s play. (In many ways, VU was a synthesis of Bob Dylan and The Doors, at least in the beginning.)

Amazingly, The Doors struck an immediate chord with listeners and nearly topped the US charts. Not everyone has been enamored of their work since. Critic Lester Bangs famously called Morrison “Bozo Dionysus” in the 1980s, apparently because Morrison wasn’t the right kind of alcoholic. But their music had an immediate and heavy impact on the next wave of musicians, from VU to The Stooges to Patti Smith, much as Led Zeppelin influenced a whole generation of heavy metal bands. Until I hear otherwise, The Doors is the best rock & roll debut I’ve ever heard.

Words & music to all songs by The Doors unless noted.

Original 8-track version
A1. Break on Through
A2. Light My Fire
A3. Take It As It Comes
B1. Soul Kitchen
B2. The Crystal Ship
B3. Twentieth Century Fox
B4. Alabama Song
C1. Back Door Man
C2. I Looked at You
C3. End of the Night
C4. Alabama Song
D1. The End

Expanded 8-track reissue version
A1. Break on Through
A2. Soul Kitchen
A3. The Crystal Ship
A4. Alabama Song
B1. I Looked at You
B2. Take It As It Comes
B3. Light My Fire
C1. Twentieth Century Fox
C2. End of the Night
C3. Back Door Man
C4. You’re Lost Little Girl
D1. The End