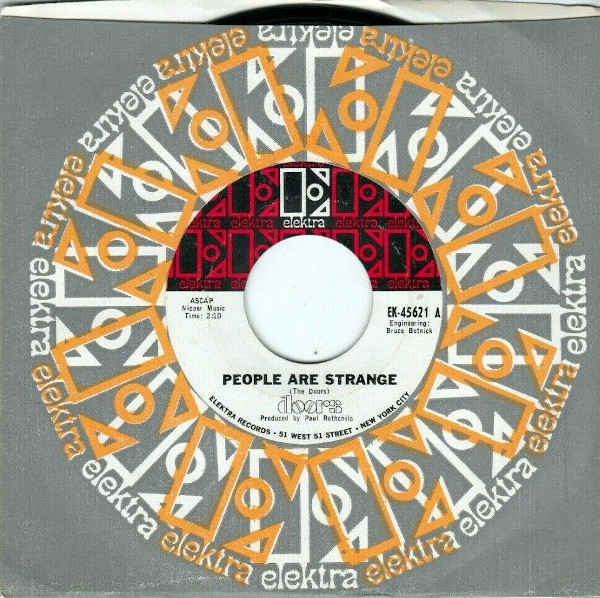 Depression and euphoria make for strange bedfellows on the first single from Strange Days.

The Doors’ second album was less physical/mystical than their first, in many ways reflecting what may have been Jim Morrison’s bipolar condition with songs that reflect depression, euphoria and alienation. People Are Strange captures all three of these emotions perfectly, as Morrison muses at the strange world around him and, in doing so, captures something universal about the human condition. “Faces look ugly when you’re alone / Women seem wicked when you’re unwanted” — that’s some pretty deep stuff. The band’s arrangement is theatrical: part carnival and part Brecht/Weill.

The B side is Morrison sympathetically observing someone else’s depression. Unhappy Girl again matches dark subject matter with a light arrangement, including playful bottleneck slide from Robby Krieger and backwards-recorded keyboards from Ray Manzarek. The band’s recent discovery of 8-track recording is put to good use here. When The Doors Greatest Hits was released in 1980, “People Are Strange” was selected as one of its singles, this time with “Not to Touch the Earth” on the flip side.

At the time of the single’s release, The Doors were getting more attention for the song “Light My Fire,” which they performed on The Ed Sullivan Show without removing the offending line, “Girl we couldn’t get much higher.” At the time, higher would have been immediately clear as a drug reference. These days, the word has lost its stigma; in fact, it might not even strike modern listeners as a drug reference at all.