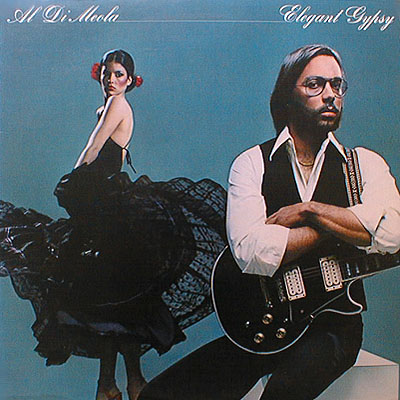 It’s 1:30 in the land of the midnight sun, and while Pontificus Maximus is off making musicmagic in some dim dungeon, Al Di Meola continues to cut through the competition with his black axe. Elegant Gypsy follows the same design as his first record and features many of the same players: Steve Gadd, Anthony Jackson, Mingo Lewis, Barry Miles, Lenny White. The new wrinkle here is the participation of Jan Hammer and the first recorded meeting of Di Meola and flamenco guitarist Paco De Lucia on “Mediterranean Sundance.” Di Meola’s second disc is also notable for the introduction of spacier sounds: synthesizers, mini-moogs and guitar effects (Anthony Jackson’s bass, for example, seems to be run through some kind of flanger).

If the effect of Elegant Gypsy is slightly less impressive than Land of The Midnight Sun (and, in my opinion, it is), it’s best to remember that Di Meola’s first record was very impressive. This time around, the arrangements are a little less breathtaking, and actually seem to drag in a few spots: Jan Hammer’s tuneless mini-moog solo on the opening track is one instance, the first half of “Midnight Tango” is another. There’s still plenty to recommend this to romantic warriors, however: “Elegant Gypsy Suite,” “Race With Devil On Spanish Highway” and the second half of “Midnight Tango.”

On Elegant Gypsy, the acoustic guitar may actually get the upper hand. There’s no denying that the duet between De Lucia and Di Meola is a heavenly alignment of stars, and even the brief “Lady of Rome, Sister of Brazil” stands out as perhaps the album’s best mix of melody and technique. Basically, this is Land of The Midnight Sun with less Santana worship, more synthesizers and a teaser of the guitar trio to come.

All songs written and arranged by Al Di Meola unless noted.

Front cover and inner sleeve picture concept and direction by Al Di Meola. Design by Paula Scher, photography by Bill King. King was a highly regarded fashion photographer at the time, known for his unique sense of capturing motion and beauty.