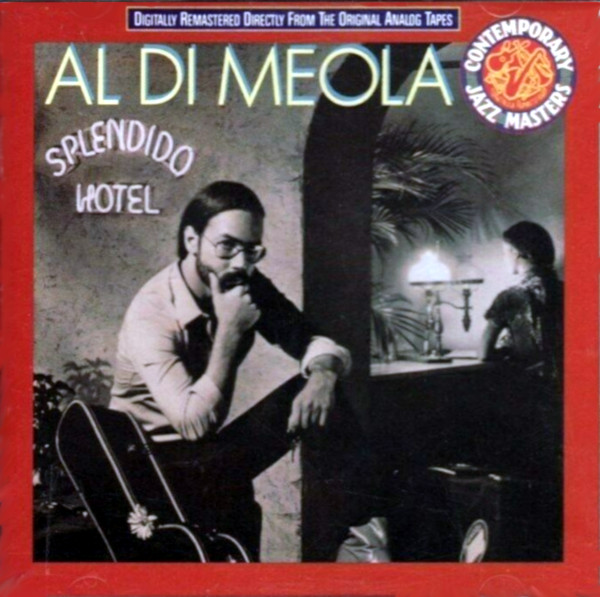 A hotel with four sides and lots of room for guitar solos, this is a double treat for Di Meola fans.

Despite their personal differences over the years, Al Di Meola and Chick Corea have always been kindred spirits musically speaking. Splendido Hotel reunites the pair in what could be seen as a remake of My Spanish Heart in the guitarist’s own image. Both are double-album displays of a singular genius from multiple angles: jazz/rock fusion, Latin, classical, funk, romantic. Now, truth be told, not all of these facets were native to Di Meola, and it seems that some were fastened on to expand the Hotel. The classical “Isfahan,” for example, has its source in the languid jazz/classical landscapes of Corea, not Di Meola. And the ready-made funk song, “I Can Tell,” while well done (Di Meola’s voice is surprisingly restrained and effective), has more in common with Stanley C than Al Di.

The rest of Splendido Hotel offers excellent views of Dimeoladom: the sonic steeplechases (“Alien Chase on Arabian Desert,” “Dinner Music of the Gods”), the various tangos (“Splendido Sundance,” “Two to Tango”) and tango fusions (“Al Di’s Dream Theme”), the romantic warrior poems (“Silent Story In Her Eyes”). Had Di Meola simply stopped there, Splendido Hotel would have been a logical (and excellent) continuation of his first three albums. Instead, he adds about an album’s worth of material that exposes a heretofore unseen side of the artist: smooth jazz (provided by a young Philippe Saisse on his first recording), funk, classical and pop (a duet with Les Paul on the Al Martino hit, “Spanish Eyes”), and even a closing lullaby (“Bianca’s Midnight Lullaby”).

As I said earlier, it’s a bit of a case of artificial siding, but Di Meola doesn’t disappoint in any of those settings (although “Isfahan” is admittedly arid). I’d stop short of calling Splendido Hotel his masterpiece, because Al Di Meola albums don’t shake out like that; consistency is one of his hallmarks. Rather, this is a masterful collection of many pieces, some of which fit perfectly with previous impressions, and others that are slightly foreign but nearly as flattering.