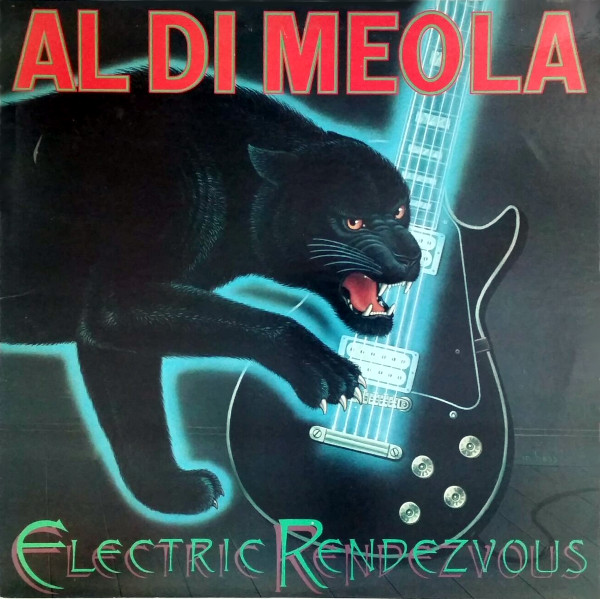 The last of the fusion albums with his original lineup and featuring the usual fireworks.

This is the fifth and final studio album from Al to feature the fiery fusion lineup of Steve Gadd, Jan Hammer (okay, fourth for Hammer), Anthony Jackson and Mingo Lewis. Phew. It’s a breathtaking body of work, those albums, containing everything from prog-fusion epics to sultry tangos. This time around, the title track (which ranges from jazz to heavy metal) and an acoustic duet with Paco De Lucia, “Passion, Grace & Fire” are the show-stealers, although Jan Hammer’s “Cruisin’” deserves an honorable mention as a radio-friendly entry worthy of Jeff Beck.

Electric Rendezvous opens in customary fashion with a Mingo Lewis instrumental, “God Bird Change,” which first appeared on The Tubes’ third album, Now. The song’s structure hasn’t changed much in five years, but The Tubes’ performance is about ten degrees cooler that Di Meola’s. “Electric Rendezvous” begins with shades of Steve Hackett’s compressed nightmare worlds before descending into its own subterranean sphere of fusion, Latin, heavy metal and whatever other winged creatures the guitarist can conjure. Every Al Di Meola album so far has had at least one absolutely stunning prog-fusion epic, and I might be tempted to give “Electric Rendezvous” the nod over all of them.

Side one closes with a taste of Al’s acoustic side, “Passion, Grace & Fire,” also the namesake for his next album with Paco De Lucia and John McLaughlin. The first side of Electric Rendezvous sums up neatly the appeal of any and every Al Di Meola disc to date: you get nuclear fusion, prog and classical beauty all done al dente by an all-star group of musicians. The second side of music doesn’t sustain that level of excitement, and you begin to wonder whether the template for Al Di Meola albums hasn’t become a bit trite. “Cruisin’” is catchy, but it’s more of a Jan Hammer vehicle than a showcase for the electric guitar. “Black Cat Shuffle,” written by the group’s other keyboard player (Philippe Saisse), recalls the work of Chick Corea, but not his best work. Things get more interesting with the sexy Spanish workout of “Ritmo de la Noche” and the thoughtful acoustic-synth pairing of “Somalia” and “Jewel Inside A Dream.”

Not everyone, I realize, needs to own five fusion albums by Al Di Meola. There are bills to pay, unscrupulous corporations to invest in, expensive penis-enhancing cars to buy, and so on. On the very good chance that you enjoyed his earlier forays into fusion, however, I would tell you that a copy of Electric Rendezvous is money well-spent. His fusion albums represent some of the most exciting music committed to vinyl, and if they tend to be formulaic, it’s a formula that works for me every time.