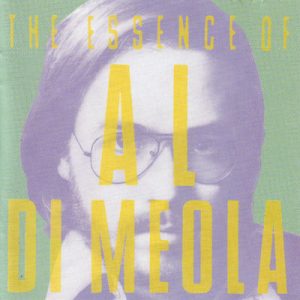 And I found myself in the great Hall of Guitar Heroes, past the familiar figures of Robert Fripp, Steve Howe, Allan Holdsworth, Frank Zappa and the rest, looking at a large unopened box in the back marked RETURN TO FOREVER. Must have been an impulse purchase, I mused, fueled by a fusion reverie. So I unpacked it, wound it up, and soon found myself frozen in amazement. “We’re putting you up in the front of the hall today!” I exclaimed. It’s not that I didn’t expect Al Di Meola to be good–you couldn’t listen to him tear up the place with RTF and think that–but The Essence of Al Di Meola distills something even stronger than that band. Both have a strong Latin influence (as does Santana, the other reference point), but Di Meola’s compositions aren’t just strong, they’re on steroids. How else to describe “Race With The Devil On Spanish Highway” or “Egyptian Danza,” instrumentals that move with hummingbird celerity and precision. This compilation draws selections from the Columbia years, skipping over his first album for some reason: three from Casino, a pair each from Elegant Gypsy and Electric Rendezvous, tokens from Scenario and Splendido Hotel. The supporting musicians include the brilliant Barry Miles on keys (who handles Corea’s “Senor Mouse” without a hitch), RTF alum Lenny White, the legendary Steve Gadd and Paco De Lucia. Di Meola’s guitar takes a greater share of the limelight than it did with RTF, with better results (that is, if you like your fusion to lean a little more toward rock). Sometimes, as on “Electric Rendezvous,” Di Meola almost crosses over into speed metal, spitting out rapid rhythmic nails from his fingers. The mood is alternately smooth, soft as a Latin sunset, invigorating, unpredictable, exotic. It’s to my chagrin that I’ve waited this long to unpack him; for years, Di Meola has enjoyed a crossover success accorded to few fusion players. All I can do now is warn others away from my folly. If you enjoy RTF, don’t spend your money on Corea albums looking for the same light. Seek out Al Di Meola’s Columbia albums. There’s nothing to fear here but your own happiness.

All songs written by Al Di Meola unless noted.