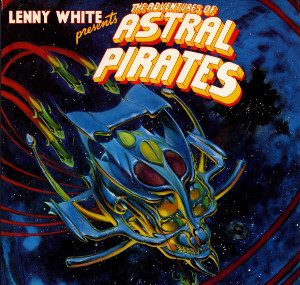 Okay, so this one isn’t as good as it looks but, in its defense, it looks awesome. The record revolves around a science fiction story of space pirates who steal a powerful device to save a dying world (and make some money), only to be guided to a strange world where they battle a cyborg bent on world domination. In between is a message about the importance of music and universal love, plus your obligatory ambisexual orgy (they don’t call them astral pirates for nothing). The music is a mix of progressive fusion and funk, not markedly different from Venusian Summer but without the stellar lineup. It’s tempting to see the presence of Don Blackman as a kind of Clarke/Duke axis on which these adventures spin; their “Universal Love” plies the same sort of smart funk. There are also songs that recall the work of Al Di Meola (“The Great Pyramid”) and Chick Corea (“Mandarin Warlords”). If you’re comfortable in the universe of mid-70’s fusion, this is an adventure you’ll enjoy. Of course, concept albums are difficult to make, and the music doesn’t always follow the narrative, at least to my mind. Close your eyes and you may hear an intergalactic tale unfolding, but you won’t (for example) be thinking about an interspecies intergalactic orgy on “Stew, Cabbage And Galactic Beans” (which, in retrospect, I suppose I’m thankful for). What I end up doing is keeping the story in mind as I listen to the music, without going chapter by chapter. That way, I can appreciate the narrative (which is interesting) and the music (which is excellent) without worrying about which notes represent the cyborg on “Heavy Metal Monster” (none of them, apparently). There are a handful of RTF-related albums that offer better music, but as a last hurrah for progressive rock/fusion, Adventures is a tale that deserves at least one spin on your turntable.

New Riders of the Purple Sage: The Adventures of Panama Red (1973)