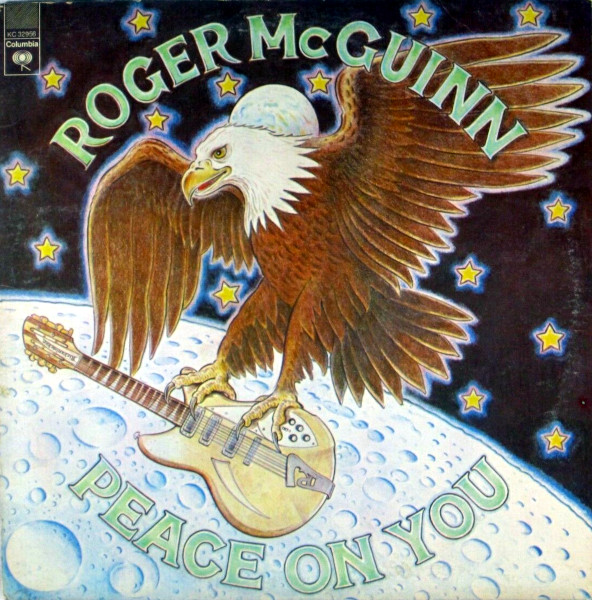 McGuinn’s second album is of a piece with those solo CS&N albums.

When Roger McGuinn released his second solo album, Columbia promoted it by playing up McGuinn’s status as a rock & roll legend. It was a point that needed making after several mediocre Byrds albums and a solo record that somehow managed to fly under the radar of rock fans and radio stations. Peace on You isn’t a markedly better record than his first, again suffering from an identity crisis as McGuinn brings in material from other writers, although the production value has more oomph this time. It’s not a bad record and, in fact, grows on me the more I listen to it, but at no point do I have the sense that I’m listening to a rock & roll legend.

Of course, McGuinn wasn’t the only rock star to flounder in the mid Seventies: Neil Young rejected his rock-star status, John Lennon retired, Joni Mitchell was making jazz records. And Peace on You isn’t any worse than those Stephen Stills albums. Individually, the songs are interesting enough. In fact, the songwriting partnership with Jacques Levy was proving almost as fruitful as the Hunter-Garcia team. The Lady, Gate of Horn and Without You are all solid songs with good lyrics. Two songs from James “Donnie” Dacus, who would join Stills in the studio the following year, are also very good: Going to the Country and Do What You Want To.

The remaining songs come from very different quarters. Better Change from Dan Fogelberg is a nice match for McGuinn’s voice; (Please Not) One More Time, featuring Al Kooper, not so much. But the oddest choice is the decision to make a fairly straight cover of Charlie Rich’s Peace on You (from his award-winning Behind Closed Doors album of the previous year) the centerpiece of the album. It gets the album off to unsteady start from which it never really recovers.

As I said, this album grows on me the more I listen to it, and the quality of the individual songs make up for its inconsistencies. Bill Halverson (credited with wife Suzanne) provides plenty of production polish and the backing band (featuring past and future Stills collaborators) is a nice change of partners. It’s no Desire, but it’s no dog either.