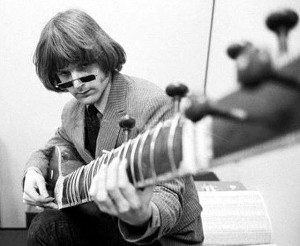 The principal figure in the second-most-important American rock band of the 60s, Roger McGuinn’s legend always seemed to fit him loosely. With his distinctive, twangy voice and immediately recognizable 12-string Rickenbacker, McGuinn was one of the most influential musicians of his time. Yet his stature as the Big Byrd never translated into a successful solo career. He recorded five albums in the 70s, only one of which cracked the US Top 100 (1974’s Peace On You), and by 1975 he could be found among Bob Dylan’s supporting tour musicians as part of the Rolling Thunder Revue.

In 1979, a reunion with Gene Clark and Chris Hillman led to one of the year’s best albums, but the partnership was over by 1981 and McGuinn didn’t release another album for a decade. In 1991, encouraged by the success of Tom Petty and the Traveling Wilburys, Arista Records released a new Roger McGuinn album entitled Back From Rio. Sounding strikingly like Tom Petty and the Heartbreakers (who were featured on the album), Rio became one of the year’s biggest surprises. There would be no encore, however, as McGuinn turned his interests to self-released folk recordings (a trait McGuinn shares with the fictional Doonesbury character, Jimmy Thudpucker).

CCD (2011)
Rolling Down To Old Maui / Randy Dandy Oh / So Early In The Spring / Catch The Greenland Whale / Go To Sea Once More / South Australia / Let The Bullgine Run / Back To Sea / Golden Vanity / Heave Away Me Johnnies / The Argonaut / Spanish Ladies / The Bonny Ship The Diamond / Sailor Lad / A Roving / The Cold Cold Coast of Greenland / Away Rio / Haul Away Joe / Drunken Sailor / The Handsome Cabin Boy / Greenland Whale Fisheries / Liverpool Gals / Ruben Ranzo. Released on CD on May 25, 2011 in the US (CD Baby).