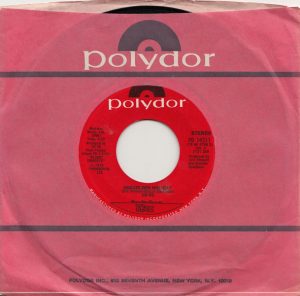 Kronomyth 7.1: DREADFULLY FUNNY. I read on the Internet (probably Songfacts) that this song was inspired by an incident that happened while Graham Gouldman and Justin Hayward (of The Moody Blues) were on holiday in Barbados. This would probably be considered racist today; ah, for the 70’s, when we all had longer hair and thicker skins. (The band also released an early music video for this song; now that was racist.) The B side is a nonalbum track, “Nothing Can Move Me.” It’s a bland rocker that one can only assume is very, very subtle irony. Because one shudders to think otherwise.