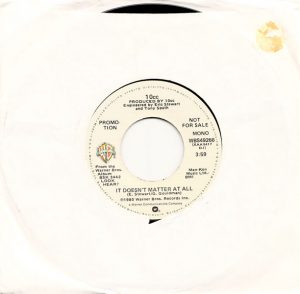 Kronomyth 9.1: INCONSEQUENCES. This soft, fluffy ballad was floated as the first single from Look Hear? and promptly disappeared from the airwaves. It’s not an awful song, in the same vein as “People In Love” and “For You And I,” both of which were a blanching of something that used to be so colorful. As I’ve mentioned elsewhere, 1980 was a turning point where bands were either looking ahead or looking back. “It Doesn’t Matter At All” is guilty of being nostalgic at a time when 10cc could (should?) have embraced new wave like Alice Cooper (Flush The Fashion) and Paul McCartney (McCartney II). There’s also a video of the band lip-synching to this in which you can clearly make out Eric Stewart’s Dracula teeth, proving that all pop music is made by undead vampires who keep recycling the same melodies every hundred years (and harvest the organs of drummers, but that’s another story).