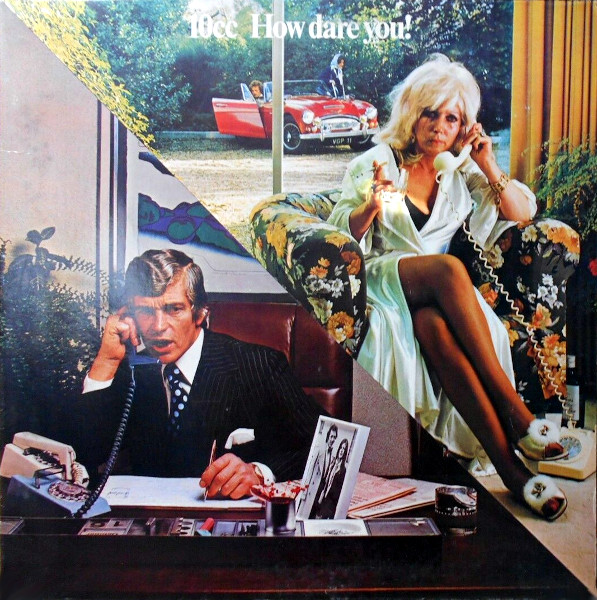 The last album from the fab foursome before Godley and Creme left to make art for its own sake.

How Dare You! might be a concept album about relationships, might be a pop album with artistic aspirations, an experimental album with pop sensibilities, etc. One thing’s for certain: it’s the last album from the original quartet, and thus the last album to feature the usual tug-of-war between Godley and Creme’s unpredictable artiness and the pop songwriting craft of Gouldman and Stewart.

The album generated another pair of UK Top 10 hits – the ironically titled Art for Art’s Sake and I’m Mandy Fly Me — and continued to confound American listeners. It’s not their most enduring work, but 10cc can produce good music even in an atmosphere of acrimonious auto-pilot. Rock ‘n’ Roll Lullaby is an adorable song about waking up Dad in the middle of the night, Iceberg and Head Room play with music hall motifs a la The Kinks, I Wanna Rule the World is interesting if a little demented.

The trouble here is that the songs don’t pack a collective punch like Sheet Music; there are simply too many lulls in between all the good ideas (case in point: Don’t Hang Up), and either the momentum dissipates or the listener simply gets distracted. It’s obvious that a group with this much talent should have more to show for it than How Dare You! Lol and Kevin would continue to make music like this while experimenting with sonics on albums like L and Freeze Frame; Eric and Graham ironed out the weirdness (with wonderful results) on Deceptive Bends. 10cc was always an uneasy alliance of styles, but they left some great music behind them.

Japanese CD reissue bonus track
10. Get It While You Can