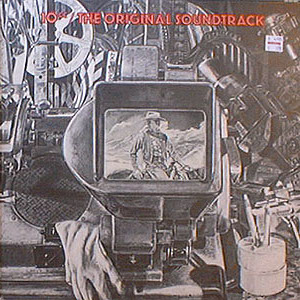 Kronomyth 3.0: ENNUI IN PARIS. One hour with 10cc is like a day with any other band. So many different avenues are taken on The Original Soundtrack: languid ballads, crank rock and loopy stories. The result is indigestion of the senses. “Une Nuit A Paris” and “Brand New Day” are the sort of wanky stuff that made Godley and Creme a real bore sometimes, while the three Gouldman and Stewart tracks (or two of them anyway) offer welcome relief. The wondrous “I’m Not In Love” and the clever “Flying Junk” are highlights here, since I look to 10cc for left-of-center pop with unforgettable hooks. When the art and pop camps come together (“The Second Sitting For The Last Supper,” “Life Is A Minestrone”), the songs are agitated, slightly sugarcoated nonsense. Listening to this record, I can hear where a critical backlash was inevitable. Starting the record with the three-part “Une Nuit A Paris” is just so pretentious that you’ll either love the move or hate it. Closing the album with the loungey “The Film of My Love” is almost a bittersweet reminder of what could have been: clever pop music that twists stereotypes into humorous parodies. Some have suggested that “Une Nuit A Paris” is a parody of French music, but it ends up maligning the French in the process (I know, you’ll say, they’re used to it). It underscores a problem with 10cc’s parodies: they’re more mean-spirited than they need to be. “The Second Sitting For The Last Supper” is almost offensive; that their humor was never misinterpreted like Randy Newman represents a dodged rubber bullet indeed. I always had the sense, listening to this record, that Eric Stewart was so distracted making one perfect song (“I’m Not In Love”), that Godley and Creme were allowed to run away with the rest of the album. The band struck a better balance on their next, How Dare You, making The Original Soundtrack the least effective effort from the original quartet.

The Pictures
Sleeve design and photograph by Hipgnosis. Pencil drawings by Humphrey Ocean.