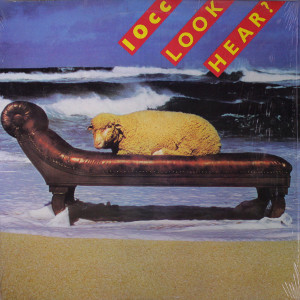 Look Hear? is another unpredictable delight. Oh, wait, I must have fallen asleep face down on the Warner Bros. promotional insert again. Said insert also claims that this is the first album from the new lineup, a distinction that actually belongs to Bloody Tourists. And did you know that Eric Stewart and Graham Gouldman wrote the majority of 10cc’s hits? I’ll bet Lol Creme and Kevin Godley didn’t. Okay, enough of picking on Warner Bros., who got what they deserved when Look Hear? tanked like a wet sweater in a swimming pool. As sheepish a collection of pop songs as they’ve recorded, this album audibly retreats into the ‘70s at a most inopportune time. 1980 produced a quantum leap in popular music thanks to albums like Remain In Light, Scary Monsters and Peter Gabriel III. Not that anyone expected 10cc to keep pace, but Look Hear? isn’t even running in the right direction. Graham Gouldman and Eric Stewart still deliver a few pleasant melodies on songs like “I Hate To Eat Alone,” “How’m I Ever Gonna Say Goodbye” and “I Took You Home,” but nowhere (except possibly “Lovers Anonymous”) is there a hint of the playful subversion that made their music so palatable in the past. It was enough to end their brief affair with Warner Bros., who could now correctly claim that Look Hear? was the last album recorded by the new lineup. Granted, 10cc wasn’t the only intelligent band to sputter into the ‘80s (Camel and Gentle Giant come to mind). A few limp nods to reggae also slip into the mix, at no time recapturing the cuteness of “Dreadlock Holiday.” If you want to know where 10cc’s talent went, don’t look here; pick up Godley & Creme’s Snack Attack instead.

The Pictures
Sleeve design and photography by Hipgnosis. Illustration by George Hardie.