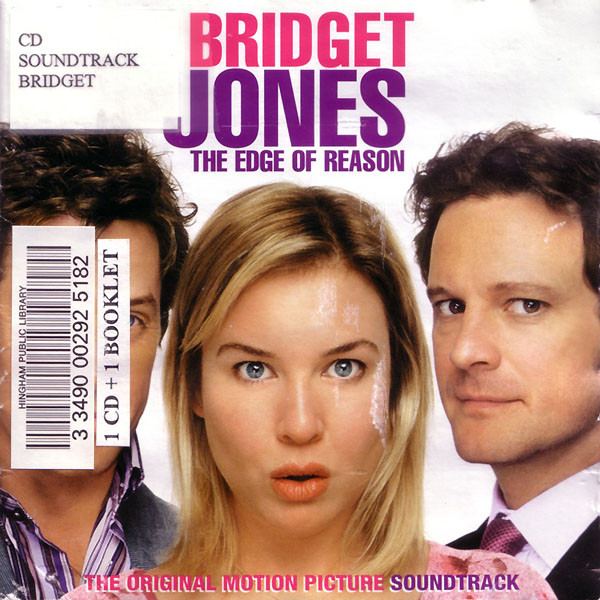 The soundtrack to the sequel to the sound of me pretending to sleep.

Kronomyth x.x: Zellweger, get her tonight.

Perhaps somewhere, maybe on a site called romcom.com, a heated forum discussion on Tales of Topographic Oceans takes place. At least that would assuage some of the guilt I feel wasting time on a site called Progrography with this piffle. Unfortunately, once I discovered that this soundtrack to the Bridget Jones sequel housed the only known version of Sting’s remake of We’ll Be Together with Annie Lennox, I was on the hook to bag and tag it. (It is, I assure you, a compulsion to complete the puzzle and not a misplaced man-crush that compels me.)

Despite its groovy, growling techno touches, the new version of “We’ll Be Together” should be read as a warning. The pair do not have complementary voices, but in fact sound very similar, so that I would have preferred a version from one or the other but not both together. However, at 15 tracks (20 in the UK version), there are other songs to occupy our mind.

The soundtrack occasioned new material from nearly a dozen artists: Rufus Wainwright and Dido, Mary J. Blige, Jamelia, Jamie Cullum, Robbie Williams and Will Young among them. The remake of I Eat Dinner is an icy wonder, Jamelia pulls out all the stops for Stop, and Cullum’s jazzy version of Everlasting Love is pleasant. Conversely, Blige’s blithe reading of Sorry Seems To Be The Hardest Word is a disappointment. Then there are the romantic standards old and new, from 10cc’s I’m Not In Love to Kylie Minogue’s Can’t Get You Out of My Head.

The real surprises for me, since I tend to live under a prog rock most of the time, were Crazy in Love and I Believe in a Thing Called Love. I’d put both of them on my iPod if I owned an iPod and could say the word “iPod” without wincing like a stake was being driven through my groin by little demons who want to distract us from the Mass of Man with shiny metal objects. Oh kkkkk enuv.

* Tracks appear on the UK version only.