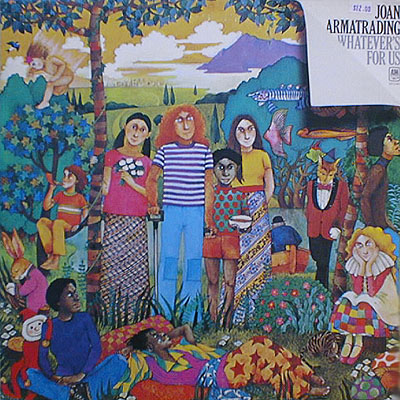 Joan’s first is patterned after Elton John, even featuring the same producer and guitarist.

It’s no accident that Joan Armatrading’s debut, Whatever’s For Us, invites comparison to Elton John, Joni Mitchell and Cat Stevens. Producer Gus Dudgeon was also Elton’s producer, and the backing band–which includes Davey Johnstone, Gerry Conway and Ray Cooper–draws heavily from the camps of John and Stevens. As for Joni’s influence, one need look no further than Joan’s intimate piano and guitar accompaniment.

As with many singer/songwriters, quantity gets the better hand of quality. These fourteen tracks could have been pared down to ten and still retained the same impact as an album. Lyricist Pam Nestor, who appears here as full-time collaborator in a role similar to Bernie Taupin, is concerned primarily with social issues (My Family) and character studies (Child Star).

Joan isn’t the compelling presence here that later albums would reveal, instead seemingly content to let the songs speak for her. And a handful of songs do stand out: Visionary Mountains (which features Johnstone on sitar), Mean Old Man, Head of the Table, Spend a Little Time, City Girl and the album’s single, Alice. Like Elton John’s Empty Sky, the songs tend to be of a piece, suggesting a talented artist who hasn’t quite found their true voice.

Subsequent albums would see her incorporating elements of rock, jazz, and island music while shifting the lyrical focus to matters of the heart. As a result, casual fans of her later records may find Whatever’s For Us too preachy and folksy for their tastes. Still, you don’t need to be a hardcore fan to hear and appreciate this material for what it is: a talented young artist’s attempt to break into the singer/songwriter field of the early ‘70s.

All songs written by Joan Armatrading/Pam Nestor unless noted.