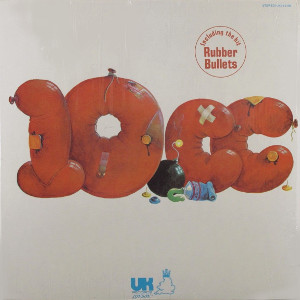 A satiric sense of humor and a keen sense of melody collide on 10cc’s classic debut album.

10cc derived their name from the average amount of semen in a male’s ejaculation. Despite an overabundance of commercial pop potential, it’s this kind of willfull strangeness that presents a uniquely sticky problem to appreciating their music. Their eponymous debut splits its time between doo-wop sendups (“Donna” is far and away the best of these) and defiantly unconventional stories that find veins of pure pop gold amidst complex but not entirely effective narrative structures. Case in point: “The Hospital Song” applies a wonderful melody to the story of a man in a hospital who takes revenge on his caretakers by peeing his bed.

In addition to “Donna,” the album features such 10cc classics as “The Dean and I” (awfully catchy, but the shifts in arrangement are hit or miss) and “Rubber Bullets” (a retro rock tune with a futuristic guitar solo). There are some obvious references to the Beatles here: “Headline Hustler” recalls the work of George Harrison, “Ships Don’t Disappear in the Night (Do They?)” and “Fresh Air for My Momma” sound like Wings, and “Speed Kills” feels a lot like “Blue Jay Way.” Similar to Sparks, 10cc’s sense of humor and love of unlikely heroes undermine their melodic craft at times, but it adds some artistic integrity in the bargain. Pop fans may feel the band’s estimable talents are misdirected, but even they’re bound to be intrigued by much of this record.