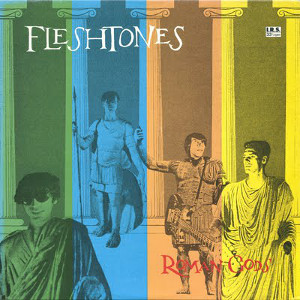 With Roman Gods, Fleshtones threw their hat into the center of the garage-rock revival. Listeners, for the most part, threw it back. New wave bands were all the rage in 1981, and old wave acts had to steal the spotlight from The Ramones or The Cramps if they wanted any attention. In a sense, Roman Gods had the odd misfortune of being both outmoded and ahead of its time. Had it been released 15 years later, Fleshtones might have enjoyed the same success as The White Stripes and The Vines—although, here again, those bands understood the importance of a good visual gimmick. The sin of Roman Gods is its lack of a compelling gimmick. If the band had played in roman togas every night, well, maybe they would have enjoyed more success as a novelty act. Those who did tune in for Fleshtones’ debut were treated to a great little party platter of raunch and roll. The opening track, “The Dreg,” is absolutely filthy in the best sense of the word. From there, the band follows the footsteps of “Cold, Cold Shoes” with the likable “I’ve Gotta Change My Life” and continues to deliver the goods for the next thirty minutes. The slick “Hope Come Back” and a sizzling cover of Lee Dorsey’s “Ride Your Pony” are highlights. The band’s only crimes have been arriving underdressed to the first garage rock revival and arriving too early to the second. Musically, they hold up as well as any of their peers. Maybe the world will rediscover Roman Gods some day and pay it the homage it deserves.