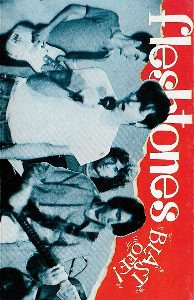 Kronomyth 2.0: A BLAST FROM THEIR PAST. The Fleshtones are a study in how not to become a rock star. A year after their debut, which inexplicably featured the band posing as Animal House extras, there still wasn’t a proper followup. So ROIR filled the gap with a 1978 session produced by punk rock impresario Marty Thau (The Ramones, Suicide, New York Dolls, etc.) and featuring early versions of “American Beat,” “Critical List” and “Shadow Line.” A raw-sounding record by design, Blast Off! is in line with the post-Ramones retro-rock revival: gritty, grungy and pretty great. Covers of “Soul Struttin’” and Suicide’s “Rocket U.S.A.” are misfires, but most of these songs deliver the goods, from the surf instrumental of “Atom Spies” to rebel rockers like “Comin’ In-Dead Stick” and “B.Y.O.B.” The problem here isn’t the quality of the songs, but the recordings themselves. For a band that was already cultivating a garage-rock sound, they couldn’t afford to take a step back in sonic fidelity. Unless you completely buy in to the garage rock ethos, Blast Off! will seem like a mixed bag. You get some really good songs at better-than-bootleg quality, but what you really wanted was a proper followup and not reheated leftovers. Of course, people who paid attention to the label (ROIR) and the medium (cassette) probably knew what they were getting; ROIR was better known for bad live recordings of punk bands than anything else. It’s hard to hear Blast Off! today without wondering how the band’s trajectory got sidetracked so quickly. In a perfect world, these tracks would have been polished and served as the world’s introduction to the Fleshtones. Instead, somebody got cold feet, and we got “Cold, Cold Shoes.”