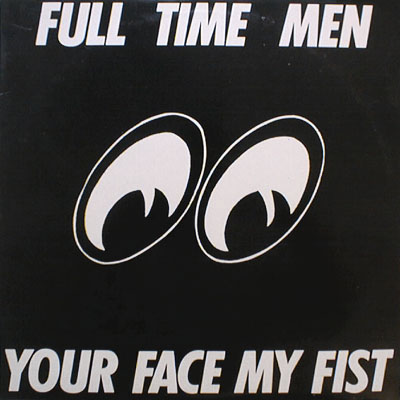 The first and only full-length album by this Fleshtones splinter group, it’s good psychedelic garage rock.

Kronomyth 1.0: Flesh of my fleshtones.

This answered the musical question that everyone was asking in 1988: Whatever happened to The Fleshtones? Okay, well maybe not everyone. Keith Streng, Bill Milhizer and Gordon Spaeth reappeared in another F’in band, Full Time Men, and continued to churn out the psychedelic garage rock that their former band was known for with Your Face My Fist (love that title). The band’s first (and only) full-length album, it reprises the earlier song “I Got Wheels,” updates the tracks “Critical List” and “One More Time,” and antes up another eight foggy, sleazy slices of psychedelic garage rock.

It would be easy to dismiss this as a novelty record, except that The Fleshtones weren’t kidding to begin with: garage rock was their chosen milieu. That Full Time Men return to the same garage is no accident, and they didn’t engage Peter Zaremba and Peter Buck just for a lark. Your Face My Fist is a legitimate artifact, a fine addendum to the career of The Fleshtones. “I Got Wheels,” “One More Time (Encore),” “Full Time Men” (which reminds me of the theme to Futurama) and “Critical List” are as good as I’ve heard from The Fleshtones. True, vocals aren’t Keith Streng’s strength, but he does manage to evoke a beastly Eric Burdon, which is exactly what you’d expect to find creeping around in a garage.

Since The Fleshtones were hardly a household name to begin with, Full Time Men was only a part-time proposition. Like Monks of Doom, “cult” band splinter groups tend to become historical footnotes. Too bad, since Your Face My Fist is a fine garage rock party record, a nod to that serendipitous span of time when rock ‘n rollers didn’t wash their hair and didn’t watch the clock–they played till they got tired. This one is really due for a dusting off; in fact the whole Fleshtones experience is something we should revisit in the future.

Art direction and layout by Anita Verdun. Back cover photograph by Timothy Loftus. Typing and specs by John Runnion. Typset by Ann of Seven Graphic Arts.