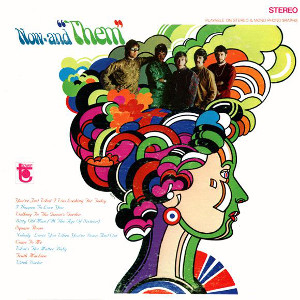 Jim Armstrong trades in his guitar for a sitar as the second lineup of Them reinvents itself as a psychedelic rock band.

Kronomyth 3.0: AND NOW AND THEM FOR SOMETHING COMPLETELY DIFFERENT. After Van Morrison left Them, you might have expected the band to quietly disappear. What you didn’t expect was a psychedelic album featuring a nine-minute Indian raga and trippy songs like “Truth Machine” and “Walking In The Queen’s Garden.” Now And Them is a radical shift from the band’s R&B origins; in truth, the band reinvented themselves after Van’s departure. Here, they take on psychedelic blues (John Mayall’s “I’m Your Witch Doctor”) and pop (“You’re Just What I Was Looking For Today,” “I Happen To Love You”), plus a few originals that reveal a heretofore undiscovered talent for psychedelic rock. The new vocalist, Kenny McDowell, won’t make you forget about Van Morrison, but he’s a legitimate singer, versus, say, having one of the other members take on the role. New drummer Dave Harvey is another solid addition and wastes little time making a good impression, giving his kit a sound thrashing on the opening “Witch Doctor.” Unfortunately, Van took most of the eyes and ears with him, and not a lot of folks stuck around to hear/see Them’s second act. These days, Now And Them is best appreciated as a psychedelic artifact (one that XTC seems to have dug, judging by “Your Gold Dress”). Whether the band really did have a psychedelic conversion of heart or whether it was just a fashionable costume change, I couldn’t tell you. Them were hardly the only R&B act to go psychedelic (I was originally going to kronomyth this “Thempathy for the Devil”). I won’t kid you, Van Morrison’s Blowin’ Your Mind is the better album, but Now And Them is a pleasant, mind-expanding addendum from the rest of Them.