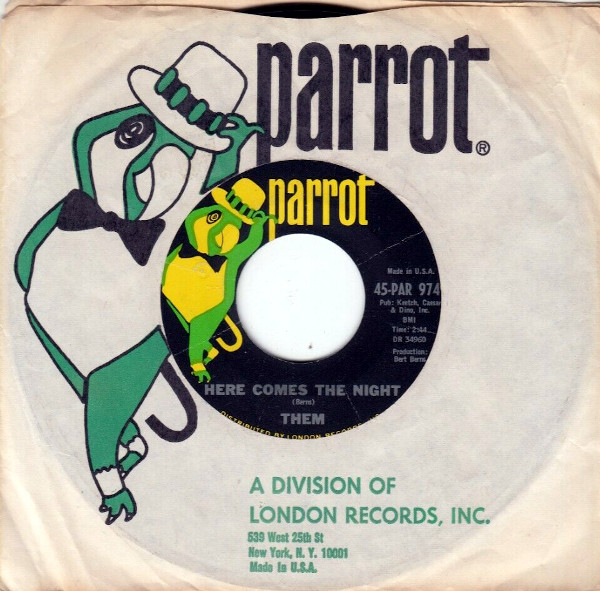 This song didn’t do much for Lulu’s career, but it helped establish Them as Northern Ireland’s newest hitmakers.

Kronomyth 0.7: Here come the Them.

Here it is: my third-favorite version of Here Comes the Night, behind David Bowie (naturally) and Lulu, who premiered it the previous year. It’s a great song, written by professional tunesmith Bert Berns, a sketchy figure in the history of rock & roll who would continue on as Van Morrison’s manager/producer until the pair fell out (quickly and inevitably) over something. Morrison’s version is faster than Lulu’s but sounds like a neutered Mick Jagger to me. When it came time for Them to record the song, studio musicians were brought in, including Andy White on backing vocals (the drummer who had briefly replaced Ringo Starr) and none other than the dark lord himself, Jimmy Page, on guitar.

The B side, All for Myself, is the better performance, featuring great vocals from Van. The melody is pretty much your standard ripoff of Bo Diddley’s “I’m a Man,” but Them infuses it with their own personality including some inspired organ playing from Peter Bardens. And, if that’s Billy Harrison playing guitar on this track, they wasted their money on Page.