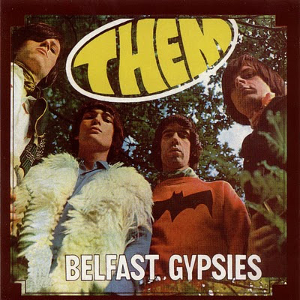 A bastardized version of the band alternately billed as The Belfast Gypsies turns up Scandinavia, proving that revenge is Swede.

Kronomyth 2.75: GLORIA IN REDUNDAM. This is one of the murkier chapters in the convoluted history of Them: an album recorded by a splinter group of the original band that was released in Sweden and, at least on the cover, appeared to be credited to Them. In reality, the band went by the legally approved name of Belfast Gypsies, and there seems to be some conjecture as to whether the official album title should be regarded as an eponymous album by Belfast Gypsies (with the reference to Them no more than a bit of bold cross-marketing) or as Belfast Gypsies by an alternate, unlicensed version of Them. At this stage, the connection to the original Them was the smallest of splinters; Pat (John) McAuley was the band’s original drummer, and his brother Jackie appears to have played in some version of the band as well. Guitarist Billy Harrison, who led the original defection, had already been replaced by Ken McLeod, while Mark Scott had the distinction of at least being the original bass guitarist in the group that featured Harrison. This dilution by degrees hardly boded well for the music and, no offense to the Swedes, their homeland has never been the epicenter of musical pop culture. All of which makes the fact that Belfast Gypsies is only marginally less interesting than Them’s official second album quite a surprise. Jackie McAuley is a screamer in the mold of Van Morrison, although clearly not up to his calibre (who was?), and the Gypsies are as professional and passionate as most British Invasion R&B acts from the period. Produced by the ghoulish Kim Fowley, the record doesn’t make any bones about cashing in on Them’s fame, from the bald rewrite of “Gloria’s Dream” (in which everyone lines up at the royalty trough) to yet another cover of Bob Dylan’s “Baby Blue.” The group also seems to get away with nicking Bach’s G string for the portentously titled “Aria of the Fallen Angels.” Despite these missteps, the album is a remarkably solid R&B exercise for a Swedish-only import. Jackie McAuley is a formidable singer, organist and harpist, and the rest of the band provides powerful accompaniment on songs like “Boom Boom,” “Midnight Train,” “The Last Will And Testament” and “People, Let’s Freak Out.” The record ends on an odd note: the disharmonious and dark “Suicide Song” and the paranoid “Secret Police.” It’s speculation on my part, but some of the more sinister undertones in the music may be the work of the crypty, creepy Fowley. This record and a few assorted singles represent the sum and substance of Them’s second act as the Belfast Gypsies. Thankfully, archivists have unearthed these recordings and given them a second life on compact disc and an audience to appreciate them.

The Pictures
Layout by Leif Illernas.