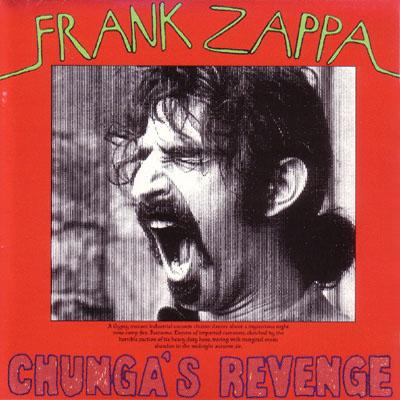 The beginning of the Flo & Eddie experiment, in which the pair become the witting mouthpiece for Frank.

Kronomyth 10.0: The Yawn and the Restless.

Chunga’s Revenge finds Frank Zappa at a kind of existential crossroads. He had just re-tooled the band, adding Mark Volman and Howard Kaylan (The Phlorescent Leech and Eddie), George Duke (displaying a heretofore hidden talent for the trombone) and Jeff Simmons. It was a crack outfit with the theatrically minded Flo and Eddie giving Zappa’s dark humor an added dimension that often felt like musical theatre (“Would You Go All The Way?,” “Rudy Wants To Buy Yez A Drink”).

From here on, you got one of several Zappa personalities: the funny, the fiery fretwork or the philharmaniacal monsters. Chunga’s Revenge has a little from columns A, B and C. There is the sense, however, that Zappa was becoming more of a rock and roll centrist, at least relative to earlier creations like Weasels and Weeny. “Transylvania Boogie” and “Road Ladies” are, at their core, blues-rock mutations, while “Sharleena” and “Tell Me You Love Me” are rock songs that could actually be played on the radio. It’s not to say that Zappa had sold out on Chunga’s Revenge (the album, for example, didn’t chart particularly well). It’s simply that you didn’t need a musical degree or a passing familiarity with Igor Stravinsky to appreciate it.

Throughout the 70s, most of the Zappa/Mothers albums would sound more or less like Chunga’s Revenge. Zappa released some fantastic albums during this period (The Grand Wazoo, Over-Nite Sensation), but the decade was largely an audible retreat from the longer compositional works of Lumpy Gravy and King Kong in favor of slightly more commercial fare. Maybe that’s exactly what you were waiting for, maybe not. I would tell you that the intimate reworking of “Twenty Small Cigars” is my favorite thing on here, but that would be a lie; it’s really “Rudy,” and therein lies the philosophical crisis that every Zappa fan would face from now on: Were we smarter than everyone else or just smartasses?

All songs composed and arranged by Frank Zappa.