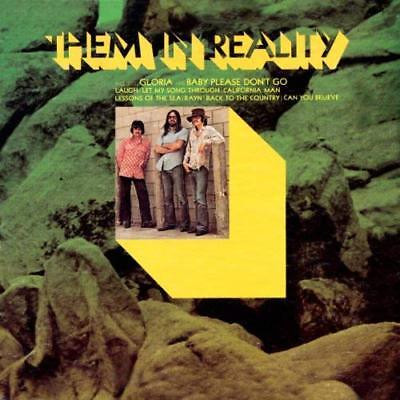 In reality, this has more to do with the continuing story of The Kitchen Cinq and Armageddon (Stark and Parker’s previous bands) than Them. Ray Ruff had produced The Kitchen Cinq, and both Stark and Parker joined the touring version of Them (i.e., Alan Henderson) after leaving Armageddon. At first, Them In Reality takes pains to position itself as a reboot of the Them brand with ferocious, psyched-out versions of that band’s two biggest hits, “Gloria” and “Baby Please Don’t Go.” The trio then borrows a tune from professional songsmith Paul Williams, “Laugh,” before handing the reins to Parker and Stark for half an album of psychedelic/country/garage rock. The playing styles of Stark and Parker are over the top, fashioned after the power trios of Jimi Hendrix and Cream but without the jaw-dropping talent. Over the years, Them has had the good fortune to attract some very good guitarists (e.g., Jim Armstrong), and Parker continues that trend. He’s also a serviceble singer, growling out “Gloria” and generally filling the shoes of Jerry Cole well enough. Henderson holds up his corner of the power trio, though he’s no Jack Bruce. The original material is typical of the Texas psych/garage scene—no surprise with Ray Ruff at the helm—similar to bands such as Space Opera or, if that reference is too obscure, a hybrid of The Troggs and New Riders of the Purple Sage. Highlights for me include “Rayn” (I’d love to hear Primus do this some day) and “Can You Believe.” They’re two of the trippiest tracks on here, so maybe that says more about my musical tastes than any intrinsic merit. The reality is that this trip is completely unnecessary unless you’re intent on collecting all of Them’s albums, or were still holding a torch for The Kitchen Cinq/Armageddon. Personally, it’s with a sigh of relief that I close the book on Them, as though putting Frankenstein’s monster out of its misery.