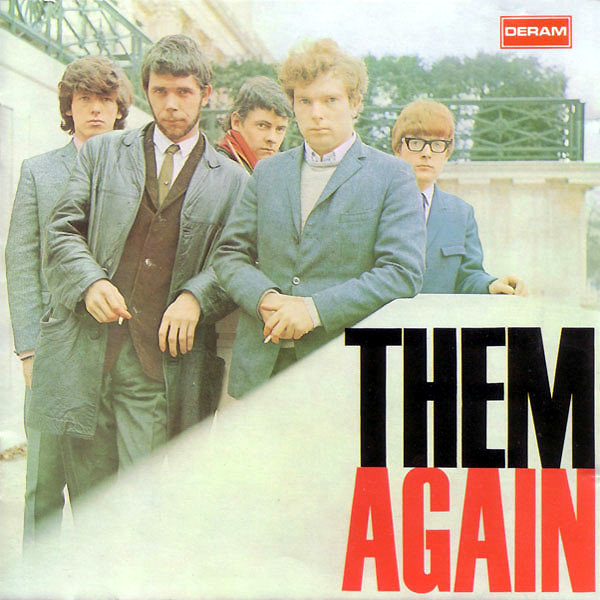 A pale followup to the first that made Van’s subsequent departure less painful.

Their first album sounded like the second coming of the Stones. This followup sounds more like a second-rate British Invasion band which, sorry, they really were at this stage. Only Van Morrision and bass player Alan Henderson remain from the lineup that recorded their debut, and Morrison himself would be out of the picture soon enough. Producer Tommy Scott clearly hoped to reproduce the success of their first album and even provides the material to do it: a rocking rewrite of “Gloria” in “I Can Only Give You Everything” plus a few clever contenders in “Call My Name,” “How Long Baby” and “Don’t You Know.” Kids weren’t buying it, though, and the record failed to produce a hit single along the lines of “Here Comes The Night.”

As one of only two records that Morrison recorded with Them, the album is historically important and not without its moments. Van’s versions of “It’s All Over Now, Baby Blue,” “I Put A Spell On You” (included in the expanded UK version) and “Turn On Your Love Light” are well worth hearing, and his originals “Hey Girl” and “My Lonely Sad Eyes” point to the good things to come on Blowin’ Your Mind. New Them-bers Jim Armstrong, Ray Elliott (who doubles on sax) and John Wilson do a solid job, although the organ playing of Pete Bardens is sorely missed.

Originally released in mono, the record suffers from the same tinny sound that marred the first, minus some of the energy that made you forgive those sonic shortcomings the first time around. As an artifact from the British Invasion, Them Again is worth discovering and not simply as a vantiquity, although it doesn’t belong on a pedestal like the first Them record. A lot of what’s here seems second rate, especially in lieu of what original acts like The Beatles, The Rolling Stones, The Who, The Kinks and The Animals were doing.

A1. Could You Would You (Van Morrison)
A2. Something You Got (Chris Kenner)
A3. Call My Name (Tommy Scott)
A4. Turn On Your Love Light (Deadric Malone/Joe Scott)
A5. I Put A Spell On You (Screamin’ Jay Hawkins)
A6. I Can Only Give You Everything (Phil Coulter/Tommy Scott)
A7. My Lonely Sad Eyes (Van Morrison)
A8. I Got A Woman (Ray Charles)
B1. Out of Sight (Ted Wright/James Brown)
B2. It’s All Over Now, Baby Blue (Bob Dylan)
B3. Bad Or Good (Van Morrison)
B4. How Long Baby (M. Gillon a/k/a Tommy Scott) 3:41
B5. Hello Josephine (Fats Domino/Dave Bartholomew)
B6. Don’t You Know (Tommy Scott)
B7. Hey Girl (Van Morrison)
B8. Bring ‘Em On In (Van Morrrison)