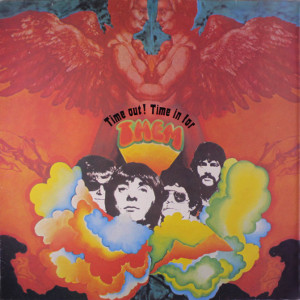 Kronomyth 4.0: TIME OUT, TIME INSECTS. The band’s second foray into the psychedelic fringes is even more interesting than their last, this despite the fact that nearly all of the material on Time Out! Time In For Them is written by an outside songwriting pair. (Tom Lane had earlier written the song “Dirty Old Man” for the band.) It’s an unorthodox approach which, notwithstanding an unusual preoccupation with insects (“The Moth,” “Waltz of the Flies,” “Black Widow Spider”), plays out remarkably well. Jim Armstrong’s fascination with Eastern music was paying fast dividends for the band, artistically if not commercially; he would make my shortlist for the best guitarists from the psychedelic era. The music on Time Out isn’t likely to displace Cream in your collection, but it’s a fine example of psychedelic rock from the period; too bad it didn’t find its way into more hands and homes. With Armstrong’s excellent playing as the draw, the music on Time Out hits some pretty good highs: “The Moth,” “She Put A Hex On You,” “Just One Conception.” Producer Ray Ruff does a nice job of capturing the right mix of bluesy energy and aural strangeness on tape while bringing Allan Henderson’s bass up in the mix to give the music a strong bottom end. Vocalist Kenny McDowell, who earlier suffered comparison to Van Morrison, is no Jack Bruce either; he is a distinctive and talented enough singer, however, to stand on his own merits. If the band’s last record, Now And Them, struck me as stylemongering, Time Out makes clear that Them can handily hold their own with their psychedelic peers. In 2004, the album was re-released with nine bonus tracks including the scorching single, “But It’s Alright,” and several versions of “Dirty Old Man” and “Square Room.”