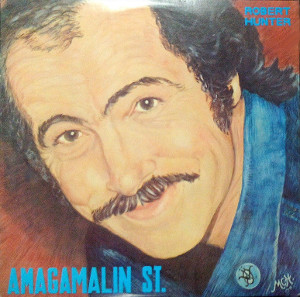 “I do believe the album is a failure. I don’t think I interpreted some of the songs right. I think the songs are pretty good. My voice gives me a lot of trouble.” – Robert Hunter, in an interview from 1985.

Robert Hunter’s first album of new music in nearly a decade* was a double-album song cycle about down-and-out losers living on the city streets. Inspired by a visit to NYC, Hunter’s story follows the intertwined lives of Chet, his friend Murphy and their (shared) girlfriends Roseanne and Maggie. Although the Dead/Dylan parallels hold, the album’s defeated characters and Hunter’s clever wordplay keep bringing me back to Lou Reed, an association I hadn’t made before. In some ways, this feels like a country-rock version of Reed’s New York, with the caveat that Reed could sing rings around Hunter. I’d have to agree with Hunter’s own harsh assessment of Amagamalin Street, since it does fail to capitalize on a great idea. Hunter tries to do too much on the opening “Roseanne,” singing the parts of both Chet and Roseanne in rapid-fire fashion, resulting in a sometimes confusing dialogue. The language is interesting, authentic, rich in nuance (when you stop to think about it), but about midway through I found myself wanting Hunter to both slow things down (so I could hear everything) and speed things up (because I was getting tired of the music). The second side continues the depressing tale of Chet’s manipulation of Roseanne, resulting in her descent into prostitution. The second side picks up the story of Chet, Maggie and Murphy. Chet is eventually dispensed with on “Rambling Ghost,” Maggie and Murphy escape on “Out of the City,” but Maggie dissappears on “Where Did You Go?” At the end of Amagamalin Street, Murphy connects with Roseanne, and a slightly brighter future for the surviving pair is implied. Yes, it’s as depressing as it sounds, the hopeful ending feels tacked on, and Hunter’s voice effectively undermines the first half of the story (he sings in a lower register for Murphy, with better results). That said, Amagamalin Street is appreciably ambitious, well played in places (the backing band does a solid job with Hunter’s sometimes spare melodies) and lyrically astute. I’d say it’s only a partial failure and a partial triumph, since completing something of this magnitude isn’t easy. Hunter’s fans presumably come to hear what the man has to say, not to hear him sing, and he says a mouthful here. At some point, it would be great to hear this staged with different singers and richer arrangements, since the idea and the lyrics merit the effort.

* If you totally ignore the fact that Jack O’ Roses had new music on it, which apparently I did (see comment below).

All songs written by Robert Hunter.
* Does not appear on CD reissue because of time constraints.