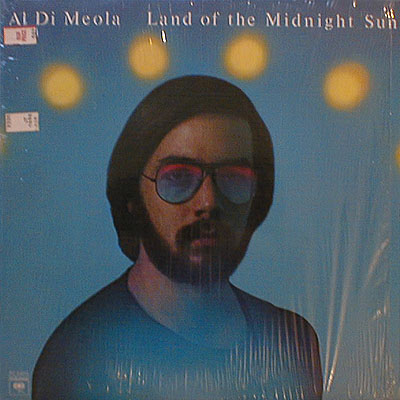 You may never return to forever after you start listening to Al’s solo albums–they’re that good.

Kronomyth 1.0: A wizard arrives precisely when he means to.

If you want to learn what made Return To Forever the greatest fusion group of its time, don’t listen to their records. Listen to the solo albums they made in between those records: My Spanish Heart, School Days, Venusian Summer, Land of the Midnight Sun. They’re breathtakingly inventive albums that stand with the best progressive fusion of their day, which is to say, Return To Forever.

DiMeola was only 22 years old when he released his debut album, but 40 years later it still stands as one of the more amazing guitar fusion albums of all time. In a sense, DiMeola burst into the music scene with RTF, and he certainly bursts out on the opening track, “The Wizard.” Written by Mingo Lewis, who provides the propulsive percussion behind the music, DiMeola unleashes a fiery performance that mixes tango, rock and fusion and throws it at the listener at the speed of thought. The title track, featuring Lenny White on drums, is slower but equally flawless in execution; DiMeola’s mastery of his instrument at such a young age is one of those musical paradoxes. His technical proficiency is only part of the story, though. Equally baffling is his ability to balance his technical proficiency with constantly inventive arrangements. There are no missteps on Land of the Midnight Sun; even when DiMeola takes to singing on “Love Theme,” the results are excellent.

The second side of music is split between the multipart “Suite – Golden Dawn,” which shifts from tempest to calm to cool funk/rock and features (fittingly) Weather Report’s Jaco Pastorius and Alphonse Mouzon, and a duet with Chick Corea on “Short Tales of the Black Forest.” Land of the Midnight Sun is designed to be a showcase for DiMeola, and it is, both in terms of technical ability and the maturity of DiMeola’s compositional skills. His next few albums would follow much the same pattern with slightly more or less success, but it’s here that the genius of Al DiMeola is truly unleashed for the first time, and it remains a fan favorite for that reason.