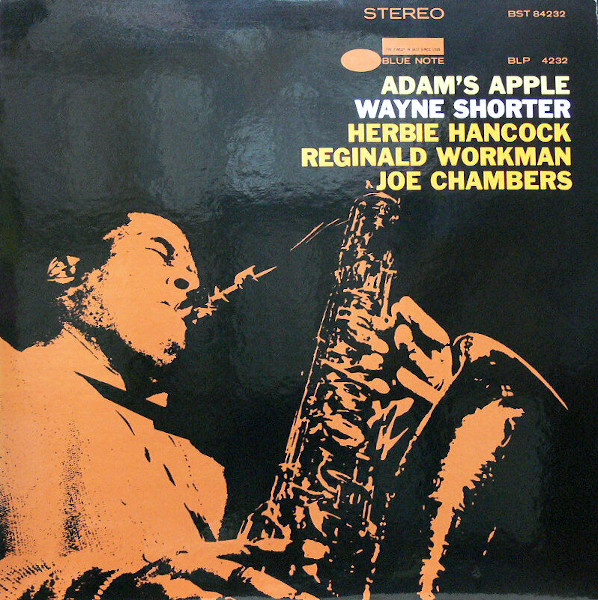 One of the least diabolical of Shorter’s Blue Note albums, featuring Herbie Hancock on piano.

Kronomyth 7.0: The apple of my all-seeing eye.

The earlier Blue Note albums (Juju, Speak No Evil, The All-Seeing Eye) basically amounted to program music around the themes of the Exotic, the Macabre and the Omniscient, respectively. With no central theme at work, it could be said that Wayne Shorter had entered into a more confident place on Adam’s Apple where he could now let his music do the talking. Or it may simply be that Shorter needed a holiday from arcane subtexts, given his ongoing apprenticeship with the archmage Miles. (Nothing on here, for example, will prepare you for the utterly diabolic version of “Footprints” that Miles recorded with the quintet for the Miles Smiles album.)

This is one of Shorter’s most plainly listenable records: the sax is clear and high in the mix, melody wins out over complexity, the rhythm section of Herbie Hancock and Joe Chamber swings, and Reginald Workman provides the hint of structure needed to hold everything together. Personally, I think Hancock and especially Workman are undermiked on this recording, although bringing Chambers up in the mix provides plenty of interesting contrast in the music.

The opening “Adam’s Apple,” recorded a few weeks before the rest of these recordings, comes out swinging in a playfully contained canter that feigns toward a full trot which never arrives. Shorter uses a similar melody for the bossa nova-based “El Gaucho.” In between them, Jimmy Rowles’ “502 Blues” gets a warm reading. On side two, “Footprints” makes its first appearance and leaves a far friendlier impression than its subsequent, fiendish doppleganger. “Teru” is a beautiful, ethereal ballad, leading up to the lively, loping stride of “Chief Crazy Horse.”

When the album was re-released on the longer CD format, Blue Note restored the Herbie Hancock original, “The Collector,” which the quartet had recorded on February 24 but left off the original album because of time constraints. It’s an experimental and noisy song that underscores how easily this album might have taken the avant-garde direction of Miles Davis. Instead, Wayne Shorter offered up decidedly sweeter fare, which has (rightly) endeared it to listeners over the years. It’s not his most profound or thought-provoking work, but it may be one of his most appl’ing.