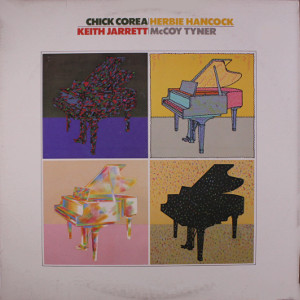 This elpee was a source of speculation for years, as I wondered what such a serendipitous summit of ivory merchants might sound like together. Apparently, I am a rube. This is simply a compilation of old and, in most cases, previously released material cobbled together to make a buck off of inexperienced jazz-tasters like, well, me. The selections are culled from Atlantic’s vaults: a pair each from the debuts of Keith Jarrett and Chick Corea, two selections from Ron Carter’s Uptown Conversation (Atlantic didn’t have the rights to any of Hancock’s solo material) and two unreleased tracks featuring three-quarters of John Coltrane’s band that date from the My Favorite Things sessions. The goal here, I guess, is to sample and compare the pianists’ different styles, but you’d really want a different platter to pick from. The album seems to get progressively difficult as it moves along. Jarrett is fluid and gentle, Corea plays in terse bursts of sound, Tyner is a torrent of notes and Hancock plays the willing accomplice to Carter’s artier explorations. I was only familiar with the Corea songs going into this, and they did sound different to me; the liner notes allude to a remix by Lew Hahn, so I’ll have to do a little more digging into that some day. Except for “This Is New,” everything here features the bass/drums/piano trio format, which always gives the piano plenty of room to breathe. You can hear that each pianist has their own distinctive style, but these styles would change over time, so comparing them here is pointless. Surprisingly, Atlantic re-issued this compilation on compact disc so a new generation can now experience the magic of being suckered into a star-studded compilation of stale treats.