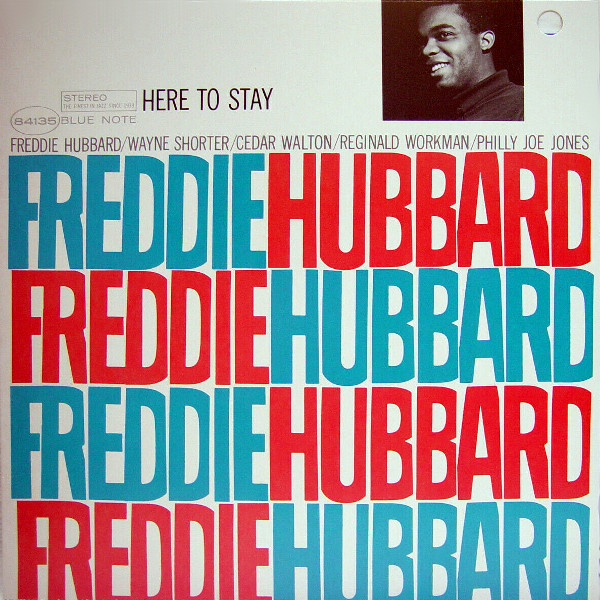 An early session from the Jazz Messengers, led by Hubbard, that apparently got lost in the mail until 1976.

For years, Here To Stay was nowhere to be found. Blue Note recorded it, even numbered it, record sleeves alluded to it, but no one had ever seen it. Then, in the midst of the bicentennial madness of big ships and history rewritten, Blue Note finally released it as a double album with Hub Cap inexplicably added, as though Here To Stay might be too fragile to face the spotlight alone after so much time in the dark.

When this session was recorded after Christmas in 1962, all of the players (with the obvious exception of Philly Joe Jones) were members of Art Blakey’s Jazz Messengers. Just two months earlier, the group (with Blakey and trombonist Curtis Fuller) had recorded Caravan (1963), the first of several albums that would feature the lineup of Hubbard, Wayne Shorter, Cedar Walton and Reggie Workman. Caravan’s last track, “Thermo,” written by Hubbard, foreshadows the formula that Freddie would follow: separated trumpet and saxophone parts, fast tempos and lots of movement.

The set gets off to an explosive start with “Philly Mignon.” Inspired by the drum-centric jazz of Blakey, it features some remarkable soloing from Hubbard. Next up is a track from trumpeter Cal Massey, one of two on here, “Father And Son,” a cool bossa nova number that shows relative restraint in the solos from Hubbard and Shorter (although this may be the best solo that Shorter gets on the set). “Body And Soul” is smooth as butter and as good a place as any on the record to point out how much Walton’s piano makes this a pleasant and restful Stay. Instead of competing with the other instruments, the piano becomes the perfect complement to them; Hubbard’s smart, swinging “Nostrand And Fulton” is a great example of the pair working together in unison. Not one to shy away from popular music, Hubbard presents the classic “Full Moon And Empty Arms,” which had been a hit for Frank Sinatra. The album closes with another Massey composition, “Assunta,” in which the trumpet plays against scales from the rest of the band; it’s an interesting effect and suggests the more experimental music of Blue Note labelmates like Herbie Hancock and Shorter himself.

Although it’s not exactly clear why Blue Note chose not to release Here To Stay in the 60s (it may simply have come to down to supply and demand, since Hubbard released a lot of music around the same time), it couldn’t have been because of a perceived lack of quality in the material. This is classic Hubbard, confident and with a crack team of players who play well together. Shorter fans can probably beg off if they want, but Here To Stay is a Note-worthy addition to Hubbard’s cupboard.