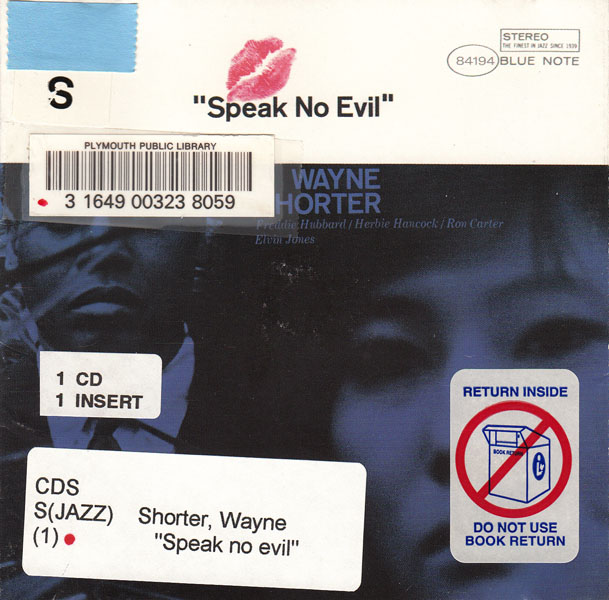 [Kronomyth 5.0]
The Magic of Christmas Evel.

It’s the day before Christmas 1964, and in the mind of Wayne Shorter medical cadavers (and not sugarplums) are dancing. The previous two Blue Note sessions had their dark moments, but Speak No Evil is downright diabolical in theme: burning witches, bloodthirsty giants, dancing dead. For jazz fans, however, Speak No Evil is a gift come early: Shorter, Ron Carter and Herbie Hancock playing together on the hallowed eve before the dawn of the new Miles Davis Quintet, a group that would represent for many the greatest jazz band ever assembled. In fact, the record looks forward to the minimalism of Miles while stepping out of the shadow of John Coltrane. Shorter and the familiar Freddie Hubbard state the melody tersely, then step back, then step forward for solos. Their presence is one of pungency rather than omnipresence, leaving Hancock, Carter and Elvin Jones to fill the blackness with darting shapes and faces. The best track here is “Dance Cadaverous;” haunting in every sense of the word, it perfectly captures the composer’s macabre mood. (An alternate take of the track is included on the 1999 remaster and has a more animated gait, although the two tracks are very similar—not surprising given Shorter’s tendency to write out the parts.) The remaining five tracks have rightly been regarded as minor classics over the years, from the startling “Witch Hunt,” which comes out swinging like a guillotine, to the ballad “Infant Eyes,” written for his daughter Miyako. With Shorter at the height of his creative powers in the mid 60s and surrounded by a supremely gifted group, Speak No Evil may well be the quintessential Wayne Shorter album. Surprisingly, Amazon’s editors ranked it #9 in the Top 100 jazz albums of all time. The rank itself isn’t so surprising as the fact that Amazon actually has editors; I just assumed they used darts or dolphins with laser pointers taped to their fins (the ones that seem to continually strand themselves on beaches, not the smart ones).

All songs written by Wayne Shorter.

The Cast
Wayner Shorter (tenor sax), Ron Carter (bass), Herbie Hancock (piano), Freddie Hubbard (trumpet) and Elvin Jones (drums). This album is the first recorded meeting of Carter, Hancock and Shorter, who would return to the studio the following month to record the first album from the new Miles Davis Quintet, E.S.P. Hubbard is an Art Blakey alumnus who appeared on Shorter’s second album, Wayning Moments. Jones was becoming a Shorter regular, having now appeared on his last three albums. The sesions were produced by Alfred Lion and recorded by Rudy Van Gelder in his Englewood Cliffs studio on December 24, 1964.

The History
Originally released on elpee in 1965 on Blue Note. The album cover was photographed and designed by Reid Miles, who did hundreds of covers for Blue Note in the 50s and 60s. Shorter is again obscured on this shot. The woman in the foreground is his (soon to be ex) wife, Teruka. The elpee was re-released in France in 1987 (Blue Note BST-84194). On January 14, 1988, the original album plus an alternate take of “Dance Cadaverous” were issued as Blue Note 46059. In 1998, this seven-track version was remastered by Rudy Van Gelder and re-issued as Blue Note 99001 as part of its RVG Edition series.