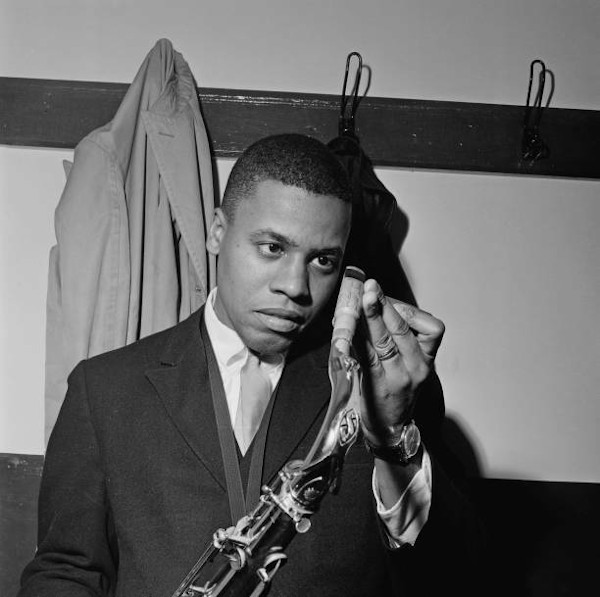 The World’s Greatest Jazz Band (Again). It’s 1960 and the world’s greatest jazz band is falling apart. The Miles Davis Quintet—he of the starless black skin who makes you wish you could spit pieces of your broken soul into the twisted metal tubing of a trumpet and have it come out sounding like hellfire on the other end—is losing the world’s greatest living tenor saxophone player, John Coltrane. Trane leaves a terrifying void… and a name to fill it: Wayne Shorter.

It’s four years later and the world’s greatest jazz band is being assembled. The new Miles Davis Quintet features Herbie Hancock, Ron Carter, Tony Williams and a tenor sax player that Miles has been trying to hire away from Art Blakey’s Jazz Messengers since a certain Trane whistled his name. Wayne Shorter is already an up-and-coming star, shining on Blue Note recordings like Juju and Speak No Evil, but in the constellation of Miles he burns even brighter. Over their next five albums, the Quintet releases 30 songs. Shorter writes 13 of them.

The Silent Killers. It’s 1969 and jazz is dying, poisoned by the nightshade fusion of Miles Davis. Shorter sticks around long enough to drive a soprano saxophone into its heart, but the real co-conspirator behind the crime is a  mad scientist named Joe Zawinul. In a Silent Way and Bitches Brew introduce listeners to a new world: a fusion of acoustic jazz and electric rock. It’s a world Shorter and Zawinul will make their home for the next 10 years, but not before Shorter completes his own Odyssey of Iska.

The Buddhist and the Mad Scientist. On their maiden voyage, Shorter and Zawinul sail straight for the edge of the known world. Down Beat hails it as the Album of the Year. Two years later, Weather Report is confounding fans with its own fusion of experimental jazz and funk. Throughout the frequent lineup changes and fitfully brilliant records, Shorter reinforces his image as the lyrical, mystical oracle of the saxophone with compositions like “Three Crowns” and “Harlequin.” Weather Report is already considered the world’s greatest jazz fusion outfit when they introduce Jaco Pastorius on Heavy Weather, and suddenly the band that looked like it had no room for improvement discovers a whole new level. In the 80s, Weather Report comes back down to earth, and Shorter leaves after Sportin’ Life is released.

Loss and Atlantis. Upon leaving Weather Report, Wayne Shorter resumes his solo career, beginning with Atlantis, which receives a Grammy nomination. Although he will release two more albums for Atlantic, they are overshadowed by the loss of his daughter, Iska, in 1986. Shorter breaks a seven-year silence with the critically acclaimed High Life, but the following year Shorter suffers a second devastating loss when his wife and niece are killed on Flight 800. High Life goes on to win the Grammy for Best Contemporary Jazz Album—his first Grammy as a solo artist. Shorter continues to release new albums with Verve into the 21st century, including the Grammy-nominated Footprints Live! and Beyond the Sound Barrier.

INTRODUCING WAYNE SHORTER (1962)
Blues A La Carte / Harry’s Last Stand / Down in the Depths / Pug Nose / Black Diamond / Mack The Knife. Originally recorded on November 10, 1959 and released on elpee in 1962 in the US (Vee-Jay, SR 3006). Re-released with bonus alternate takes. Repackaged as BLUES A LA CARTE. Also repackaged with Wayning Moments and released as Shorter Moments on 2LP in 1972 in the US (Trip, TLX-5009) with different track order and gatefold cover.

WAYNING MOMENTS (1962)
Black Orpheus / Devil’s Island / Moon of Manakoora / Dead-End / Wayning Moments / Powder Keg / All or Nothing at All / Callaway Went That-a-Way. Originally recorded on 1962 and released on Vee-Jay (VJS 3029). Re-released on elpee in 1984 (UK Affinity) and on CD in 1986 (UK Charly). Also released as WAYNE SHORTER FEATURING FREDDIE HUBBARD & EDDIE HIGGINS (with different track order) and as WAYNING MOMENTS – PLUS (with eight alternate takes).

WAYNE SHORTER (1973)
Down In The Depths / Black Orpehus / Moon of Manakoora / Powder Keg / All Or Nothing At All / Callaway Went That-A-Way / Peaches And Cream // Dead End / Wayning Moments / Mack The Knife / Black Diamond / Seeds of Sin / Scourin. Compilation released on 2LP in 1973 in the US (Crescendo, GNPS2-2075) with gatefold cover.

JOY RYDER (1988)
Joy Ryder / Cathay / Over Shadow Hill Way / Anthem / Causeways / Daredevil / Someplace Called “Where”. Originally released on Columbia (FC 44110) and CBS in the UK, and reached #24 in the US contemporary jazz charts.

BEYOND THE SOUND BARRIER (2005)
Smilin’ Through / As Far As the Eye Can See / On Wings of Song / Tinker Bell / Joy Ryder / Over Shadow Hill Way / Adventures Aboard the Golden Mean / Beyond the Sound Barrier. Originally released on June 14, 2005 on Verve, reached #10 on US jazz charts.