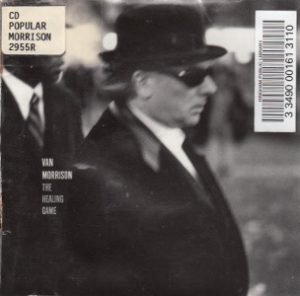 Kronomyth 31.0: DID YE GET HEALED? The photo shoot features Van and his band dressed like thugs at a funeral, fair indication that no one is getting robbed today. The hairs on the back of my neck may no longer stand up when the man sings, but little of my body works the way it should anymore. Fortunately, our man from Belfast is still peddling the same powerful tonic, even if his pipes have grown a bit more creaky, his outlook a bit more cranky, his appearance a bit more creased and crumpled. The opening “Rough God Goes Riding” is the kind of chimerical creature that Van’s fans delight in: poetry (Yeats) and Christianity (Revelations) intertwined into a mystical, musical rite. During the Nineties, Morrison assembled a cadre of crackerjack players including a stellar horn section, four-man rhythm crew, piano, organ, guitar and vocalists. Take them out of the equation and Morrison is unleavened bread, which has ever been the case. Add them to the mix and they perfectly spice up Van’s observations on life and love with crisp accompaniment, soulful horns and sweet voices. There’s certainly an element of nostalgia to Van Morrison these days, if only because the man has so much history behind him, and you have the sense on The Healing Game (and most latter-day VM records) that Van is torn between sweet remembrance (“If You Love Me,” “The Healing Game”) and sweaty resistance to age (“Burning Ground,” “Fire In The Belly”). His voice is no longer the commanding presence it once was, but that Morrison finds himself at the center of so much good music year after year is no accident. He is a catalyst for great things, a lone wolf that others would eagerly follow, a lightning rod in a tempest of talent. Rhythm and blues and soul, Van’s preferred mode of communication, may belong to a bygone era, but the music of Van Morrison belongs to all of us. We listen, and we are healed again.

Japanese CD bonus track
11. At The End of The Day

All songs written by Van Morrison.