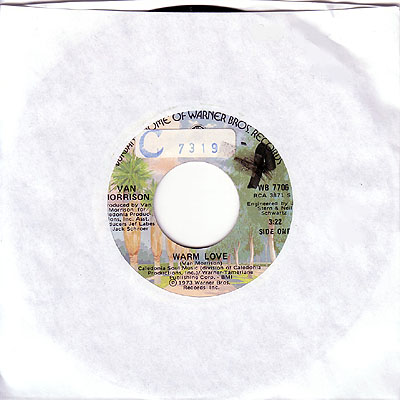 This duet featuring Van and Jackie DeShannon is so fragile it almost falls apart. That it doesn’t is a minor miracle of music.

Kronomyth 7.1: MAKE LOVE, NOT WARM. Van Morrison albums had always contained one champion: a rousing number that stirred something deep in your soul and carried you along on its joyful wings. “Warm Love” is not that champion for Hard Nose The Highway. The song initially threatens to fall apart like a tissue-paper heart before it’s bolstered by a backing band and the supporting vocals of Jackie De Shannon. There is a delicate sweetness in the song, yes, but the danger of Morrison’s rich and ready genius is the temptation to knock off one hundred warm loves without stirring deeper waters. The flip side is “I Will Be There” from his last record, Saint Dominic’s Preview. Truly, this single was an inauspicious herald of Hard Nose The Highway. In his book, Into The Music, Ritchie Yorke apparently refers to this single being released in late April and entering the Top 40 charts (a point that Wikipedia repeats). I didn’t see a single sighting of the song in Billboard’s April through July charts, although I do see that Billboard reviewed what appears to be an advance/promo copy in their May 12 issue, so I’m leaving the release date as June in the US and presuming for the moment that the single didn’t chart in the US. For my efforts, I did at least discover a new (to me) site that features a wealth of information on 7-inch singles from the 70s, a true labor of love: Seventies Sevens.