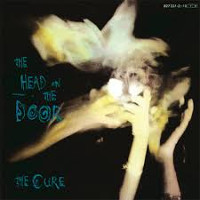 Kronomyth 9.0: CLOSE TO PERFECT. Somewhere outside of London (?), The Smiths and Siouxsie And The Banshees were being hurled one at the other in the eye-on collider of Robert Smith’s imagination. Everyone’s favorite gothic moptop had already come a-courting on songs like “The Lovecats” and “The Caterpillar,” but even they didn’t prepare you for the sweetness of “Inbetween Days,” “Close To Me” and “Six Different Ways.” With just a few synthesizers (including the Yamaha DX-7 and E-mu Emulator II) and a five-piece band that now included drummer Boris Williams, Smith converted his boiler room of intense emotions into a psychedelic candy store of sounds. Scratch the marzipan surface and, yes, it’s still the same bitter fruit you’re chewing on: fear, anxiety, loathing. But Smith has somehow found joy in his despair, and the result on The Head On The Door is the giddy realization that we can be happy in our miserable state. It’s a liberating thought, and Smith uses his newfound freedom to expand his musical borders with some very unCure-like elements, from saxophone (“A Night Like This”) to nylon-stringed guitar (“The Blood”). The contrast between light and dark is what’s most striking on this album, and it remains a kind of fulcrum on which tastes teeter between The Cure’s dark past and their bright future. I personally love the record and think it’s the best thing they’ve done, but I’m an inveterate fence-sitter, more throw pillow than man most days. 20 years later, long after the last hope that The Cure might labor in obscure darkness again, The Head On The Door was released in a deluxe double-disc edition with home recordings, studio demos and live tracks. The handful of home recordings are illuminating and (a word I would have thought to safely sequester before writing a Cure review) charming; Smith’s informal version of “Inbetween Days” is a little slice of homespun heaven. Of the remaining demos, many of which never made it onto record, “The Exploding Boy” and “A Few Hours After This” could have become contenders for a coveted album spot. The added live tracks, which focus on the original album’s darker aspects, are interesting as well, if only because you don’t hear an audience get excited at the prospect of hearing songs called “The Blood” and “The Baby Screams” every day.

All songs written by Robert Smith

All songs written by Robert Smith