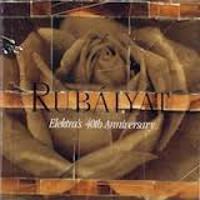 This is an interesting idea: 38 songs from Elektra’s back catalog performed in the idiom of 38 artists from their current roster, some of whom (The Cure, Linda Ronstadt) have the distinction of being both interpreter and interpretee. That said, if you were to allocate 120 minutes and 20 bucks to every interesting idea that crossed your path, you’d be more than a dollar short and a day late. I listened to this simply because I wanted to hear The Cure’s version of The Doors’ “Hello I Love You.” Elektra did me the kindness of putting that track first, so after five minutes I could have begged off a little wiser (if none the richer) and spent the next 115 minutes saving the world or filing paper or something in between. Instead, I stuck it out for the whole elektrafixation and was rewarded with a few more surprises: Billy Bragg steamrolling through “Seven And Seven Is,” The Sugarcubes messing with “Motorcycle Mama,” a Spanish version of “Hotel California” by the Gipsy Kings, Television’s “Marquee Moon” in a classical light, Jon Zorn demolishing The Stooges’ “TV Eye,” that sort of thing. The concept fails as often as not, though, largely because I didn’t care about the originals to begin with. In fact, I hadn’t even heard of half of these songs, and I grew up in the 70s. Appearances by Metallica, They Might Be Giants and Pixies are wasted on poorly matched songs that don’t deserve the attention. Too many obscure artists on both sides of the interpretations ultimately undermine Rubaiyat. Yes, this is a celebration of Elektra’s eclectic history, but I’ve worked in marketing too many years not to smell a cross-sell. Outside of a desire to hear more of The Sugarcubes, I wasn’t sold on digging any deeper into Elektra’s roster old or new.