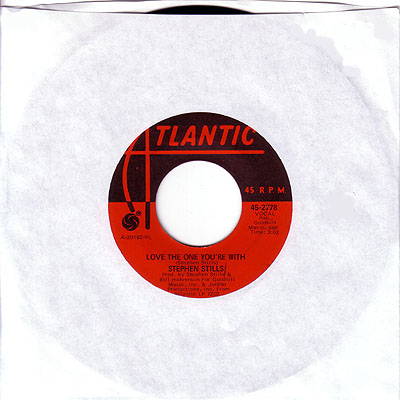 The stormy relationship of Crosby, Stills and Nash was over, with Stills fired, re-hired, and then the whole experiment discarded. You can point fingers, wag tongues, but the truth is that magnetic personalities both attract and repel. Stills wasted little time in attracting a coterie of stars for his first solo album, which was led by the brilliant “Love The One You’re With.” It’s an instant classic, with some worldly steel drums added for good measure (shades of Paul Simon there). The B side featured the pristinely produced “To A Flame,” which had a Spectoral gloss to it that gave it a distinctly dreamy feel. It’s one of my favorites on his first album, noting that his first is my favorite among all of the CSN solo adventures. Beatles fans will also detect a slight hint of Apple in the affair, as either Billy Preston or Doris Troy are typically credited for the song’s title, and Ritchie (Ringo to the rest of us) appears on the B side, apparently returning the favor following Stills’ contributions to “It Don’t Come Easy.”

Australian 7-inch EP record
A1. Marianne
A2. Change Partners
B1. Love The One You’re With
B2. To A Flame

7-inch single reissue (Atlantic Oldies Series)
A1. Love The One You’re With
B1. Change Partners