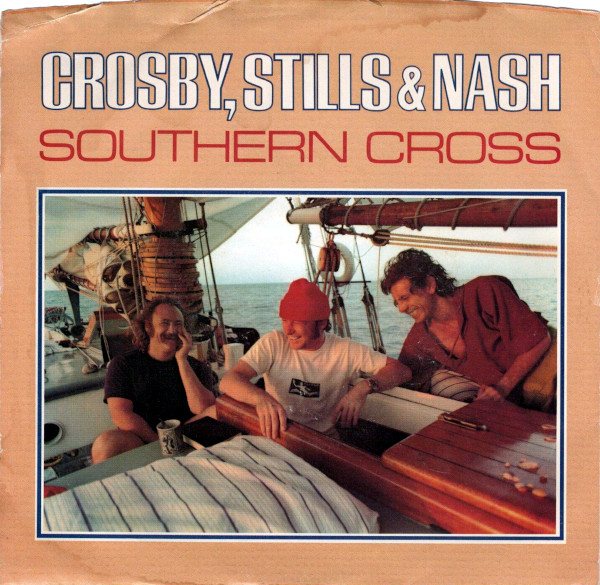 Yeah, so it does sort of sound like a lost Fleetwood Mac song, but it’s a cross that CSN bears with grace.

Kronomyth 7.2: Our hurt is quiet and our hearts tamed, as the sea may yet be tamed.*

“Southern Cross” has its origins in a different song, “Seven League Boots,” written by The Curtis Brothers and recorded with Lindsey Buckingham and Stevie Nicks (of future Fleetwood fame) in 1974. Stephen Stills rewrote the lyrics, added a new chorus and recorded it for CSN’s Daylight Again. Stills’ version is the clear winner, here re-cast as a healing sea journey, a retreat from the pain of love rather than a passionate pursuit after it as originally envisioned.

A music video was also produced, featuring the trio singing in the dark interspersed with film of Stills sailing that appears to date from 1977. (In a confusing move, the picture sleeve repurposed the cover artwork from their last album to extend the sailing motif.) The single version of “Southern Cross” is 40-45 seconds shorter than the elpee version and fades early at the end. The flip side is Graham Nash’s “Into The Darkness,” presumably written about David Crosby’s drug addiction and identical to the elpee version.

*From “Sea-Heroes” by Hilda Doolittle.