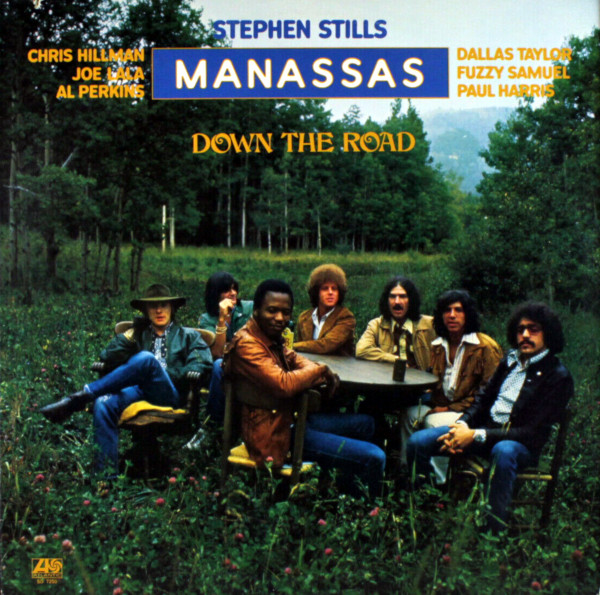 Half the size of the first album, and not half bad, but this was the end of the road for Manassas.

The second Manassas record sounded a lot like Stephen Stills 2 with better playing behind it, which wasn’t good enough for critics, most of whom panned Down The Road as second rate. It’s really not a bad record, a good half of which can hold its own with the material on the first Manassas record. Highlights include “Isn’t It About Time” (which features some blistering slide work), Chris Hillman’s pretty “So Many Times,” a pair of winning south-of-the-border songs and the closing “Rollin’ My Stone.” Unfortunately, about half of the album could be accurately described as filler, including an apparently unconscious rewrite of The Rolling Stones’ “Let’s Spend The Night Together” as “City Junkies.”

For Stephen Stills fans, Down The Road is still a worthwhile purchase. There’s no question that the man sounds better with a good working band behind him, especially when it includes extra piano, guitar and percussion. After listening to the lovely “Guaguancó de Veró,” which references his new relationship with Veronique Sanson (the pair married shortly before the release of this album), I’m convinced that Stills should pay a bongo player to follow him around everywhere.

The undoing of Manassas wasn’t an uncertain future, but the pull of the past. Stills and Hillman would soon reunite with their former bands (CSN, The Byrds), and Manassas would be remembered as a felicitous, ephemeral alignment like Derek and the Dominos. Both bands deserved an encore, Manassas got theirs, only to find that half of their audience had left in the interim. The fault doesn’t lie with the musicians but the material, which spends too much time in the middle of the road. If you’re planning on buying three Stephen Stills records in your life, it’ll come down to this or Stephen Stills 2, so take your pick.