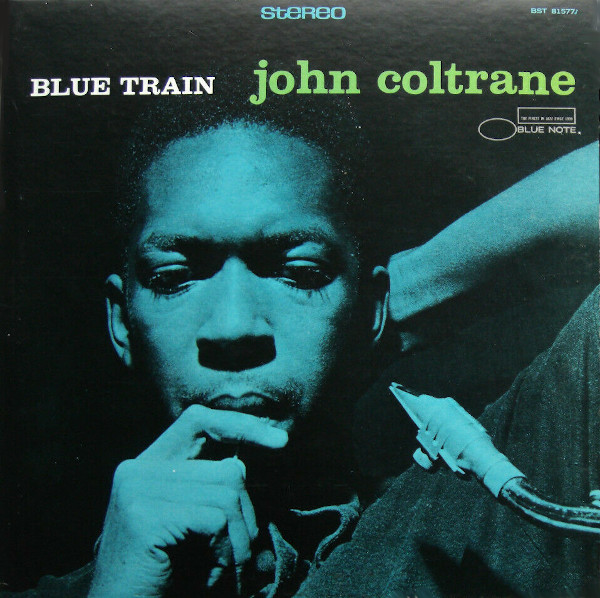 Kronomyth 4.0: Butterflies are white and blue in this field we wander through.*

Everything sounds better on Blue Note, Mingus be damned. Blue Train is the best thing Coltrane had done to date, joined by a short-lived but stellar lineup that included Kenny Drew (piano), Curtis Fuller (trombone), Philly Joe Jones (drums) and a 19-year-old Lee Morgan (trumpet), plus standup stalwart Paul Chambers (bass). The record marks the true beginning of “classic” Coltrane, with the first of many original standards to come on the instantly memorable “Moment’s Notice” and the swinging closer, “Lazy Bird.” Those two tracks and the sweetly sentimental “I’m Old Fashioned” stand head and shoulders above Coltrane’s Prestige recordings to date (“How Deep Is The Ocean?” and “Soul Eyes” notwithstanding).

Hard bop with a strong, swinging vibe, Blue Train is the tenor saxophonist at the top of his game, unloosing (seemingly) effortless and wondrous solos from the first minute of “Blue Train” onward. While you’re waiting for the next Trane solo to come, Morgan, Fuller and Drew provide plenty of diversion with their own unique and exciting solos. It’s a shame this lineup only lasted for one session, as ephemeral as a beautiful butterfly lasting but a day. Listen to Drew’s solo on “Moment’s Notice,” Morgan on “I’m Old Fashioned,” Fuller on “Blue Train,” and you’d never guess these were strangers meeting on a Trane session.

As a bonus, Blue Train marks a rare reunion with Miles Davis drummer Jones, who together with fellow MDQ alum Chambers gives the record some real bounce. Stylistically, the music seems to straddle bebop and hard bop, in case naming these things helps you. The real achievement of Blue Train isn’t so much how it sounds but how it makes you feel: joyous, free, alive. It’s the first Coltrane album to make that kind of connection with me, but certainly not the last. It’s also a great introduction to the genius of Lee Morgan, another prodigious talent loosed too soon from this mortal coil.