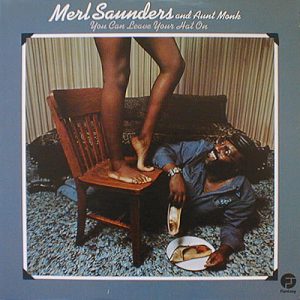 A mildly funky outing from the throaty San Francisco icon. Yeah, the cover is terrible, but Merl Saunders atones for it with solid covers from Randy Newman, Stevie Wonder and Bob Dylan. There’s no ace in the hole, but Saunders does have a pair of kings (curtis and floyd) in his hand. However, however, however… as a vocalist, Saunders makes a fine keyboard player. You Can Leave Your Hat On never catches fire. It smolders sometimes, sure, but we live in a smoky world where this sort of thing happens every five minutes on some stage. I’ve never listened to a Billy Preston record, but I imagine they sound something like this. In fact, I get the feeling that Merl Saunders and Ringo Starr have an encounter in their future. Since I’m on the hook to say something charitable about this record, I will note that the guitar solos on “I Feel Like Dynamite” (Jackie King) and “You Can Leave Your Hat On” (Arthur Adams) are terrific. Sax/flute player Martin Fierro also hands in a fine performance, especially on “Teasin’.” But I bought this album for a dollar for a reason. Unless you buy into the Merl Saunders mythology (whatever that might be), you can leave your money in your wallet. If the Keystone series is a cornerstone in your collection, maybe you’ll feel differently. I will admit that “Bahia” from Brazilian composer Ary Barroso is the sort of selection that a musicologist would love. It’s also the best track on here and should have appeared about seven songs earlier. Had Merl Saunders stuck to instrumentals, he would have left a better impression with me. He’s clearly a talented musician with an ear for good material, but that velvet frog leaves its prince in all the wrong places.