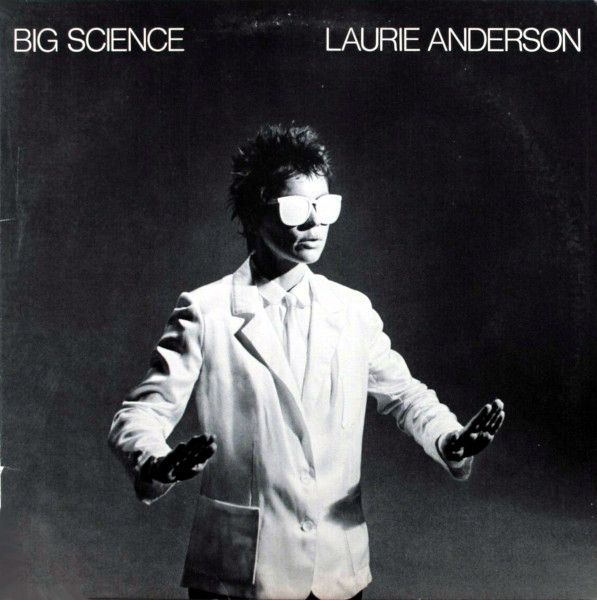 Based on her United States cycle, this is the record that put Laurie Anderson on the map.

Luminous stuff. Laurie Anderson made her reputation as a performance artist with the United States tour, which featured her playing the violin on a block of ice. It was that kind of absurdist attitude that made her plainspoken songs so unforgettable. Big Science featured material from the United States performance, including the surprise UK hit, O Superman.

The songs are minimalist dialogues that shine like the short ambient pieces of Brian Eno. Sometimes they feature actual melodies, like the wonderfully catchy From The Air, and sometimes there’s just a wisp of sound behind them, as on Walking & Falling. Looking for a reference point for Laurie Anderson is tricky; there are elements of David Byrne, Kate Bush, Philip Glass and Stan Ridgway at work, but they all arrived at their styles at about the same time. Her later albums were too self-aware of expectations; Big Science blazes into new musical frontiers fearlessly.

To call songs like Example #22 strange sort of misses the point, since Anderson is after bigger quarry than raised eyebrows. She wants you to rethink music, or at least think about music more deeply than usual. The lyrics are often spoken rather than sung, and they hang heavy in the air. Behind the lyrics are slowly shifting waves of keyboards, marimba or violin, and the unpredictable percussion of David Van Tieghem. When it all comes together, Big Science is stunning. When it doesn’t, it’s still thought provoking.

Her manipulation of everyday events, her timing, her ability to drop words will have you scratching your head and smiling. She’s not a musician, she’s a magician. You’ll wonder whether you’ve been duped by Big Science, but it’s done so skillfully you’ll admire the effort, maybe even feel flattered by it.

All words & music by Laurie Anderson