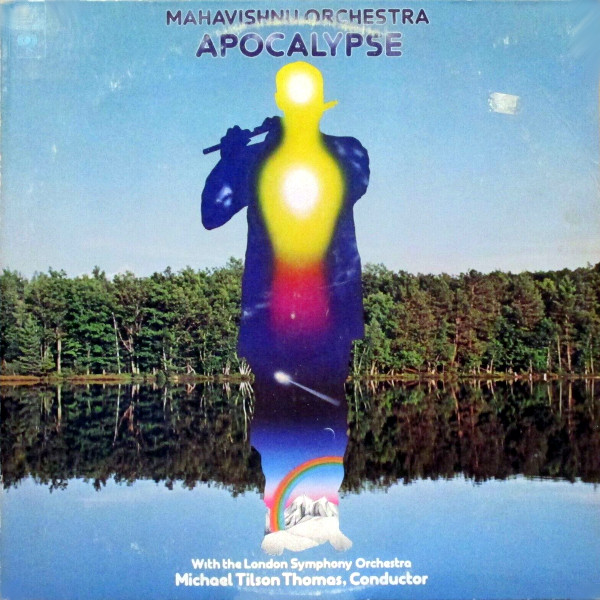 Mahavishnu takes the Orchestra in their name at face value with a symphonic journey featuring the LSO.

Kronomyth 4.0: Journey to the centre of the self.

There are risks, and then there’s Apocalypse. John McLaughlin took several big chances on this record by completely retooling the band, writing symphonic music (performed by the London Symphony Orchestra) and producing it all under the scrutinous eyes of George Martin and Geoff Emerick. What looked like a recipe for disaster on paper turns out to be another exciting musical adventure under the Mahavishnu flag. Martin himself has expressed his affection for the album, although it’s a far cry from “Eleanor Rigby.”

Apocalypse begins with a calm orchestral piece, Power of Love, that suggests dawn breaking over a new world. That peace is soon shattered by Vision is a Naked Sword, which sounds like King Crimson caught in an orchestra. Michael Walden in particular comes storming out of the gate, which is just amazing when you consider his age (21) and the fact that he was basically recording his first major album with John McLaughlin, the London Symphony Orchestra and George Martin. Jean-Luc Ponty was, of course, no stranger to musical tempests (having performed with Frank Zappa) while Ralphe Armstrong quickly establishes himself as the new bass player, no questions asked. Gayle Moran is the odd woman out, as she doesn’t replace Jan Hammer’s presence so much as provide background textures and a new element, vocals. Smile of the Beyond is a showcase for Moran’s voice, which I’ve always found to be an acquired taste, with the caveat that I still haven’t acquired the taste.

The second side begins with a noisy jazz fusion workout, Wings of Karma, with the orchestra in the background, probably perplexed. The album closes with the epic Hymn to Him. The pairing of Ponty and McLaughlin at times feels like the two instruments are kissing (you’ll need to hear it to understand). This song and “Vision is a Naked Sword” are two of the most exciting numbers that the Mahavishnu Orchestra has produced, which is saying something. By choosing such a different path for their fourth album, McLaughlin makes comparisons with the previous Orchestra seem petty. This is a new journey, a new adventure that holds some startling discoveries.

What George Martin’s role is, I couldn’t tell you. I’m sure he didn’t just sit in the booth and nod politely as they played, and his experience with symphonic pop music would have been of benefit. This wasn’t the LSO’s first foray into rock & roll (cf. Tommy, Journey to the Centre of the Earth), but it may be one of their most impressive. McLaughlin seems to have taken the Orchestra to heart by writing orchestral music at least some of the time. Apocalypse is a lot to take in. Best to set aside an hour, put on a pair of headphones and give it your full attention. It’s definitely worth the effort, though I’ve yet to encounter a Mahavishnu Orchestra album that isn’t.

All songs written by John McLaughlin. Lyrics on A3 by Mahalakshmi.