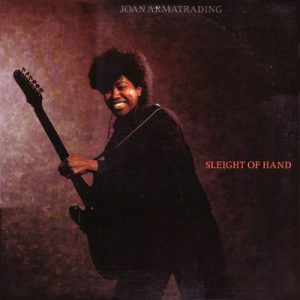 Joan took matters into her own hands this time, producing the record and handling all the guitar parts. Sleight of Hand does contain a pair of brilliant tracks that are worth the album’s price, “Russian Roulette” and “Jesse.” But Secret Secrets had better songs and, frankly, better production. Originally, I had it the other way around, calling this record sleightly better than her last. Maybe I just warmed up to the funky “Kind Words” faster than “Persona Grata.” It is great to hear Joan’s guitar front and center, but not so great to hear them compete with the bass and drums on nearly every song. As a producer, Joan’s touch is surprisingly indelicate. “Reach Out” manages to win out over the over-the-top production, yet most of Sleight of Hand suffers for it. Joan has since called it a “rock” album, which I guess it is if your idea of rock is heavy beats in 4/4 time and modern studio effects. I’ve always thought of Me Myself I as a rock album, but that’s just me. It’s a funkier record than I expected, reminiscent of Prince at times, with fewer of the musical twists and turns found on Secret Secrets. The thing is that I like Joan most when she’s being less like everyone else, and Sleight of Hand isn’t an outlier album. “Russian Roulette” and “Jesse” are charming and eccentric, “Don Juan” is romantic, “Reach Out” is powerful. The rest of the record is compressed, conventional and cold—words that you won’t usually see in a Joan Armatrading review. Then again, Joan herself has admitted a fondness for Sleight of Hand, so maybe you should take her word for it and not mine.

All songs written and arranged by Joan Armatrading.