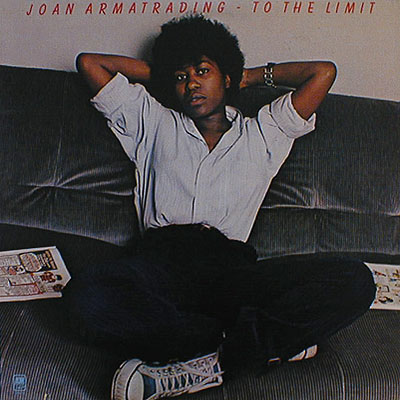 Joan’s third album, and first with producer Glyn Johns, was a charmer; her third album with Johns, not so much. To The Limit is the weakest of her classic albums. There are no big hits, no breathtaking melodies, no heart-melting ballads. What you will find here are quite a few near-misses: “Barefoot And Pregnant,” “Wishing,” “Bottom To The Top,” “You Rope You Tie Me.” In a different setting (say, without the lyricon, which was always a strange musical beast) and, sorry, with a different producer (so much for services rendered, Mr. Johns), To The Limit could have been a better album. Or maybe the restless feel of the record reflects the artist’s fractured state of mind; I’m just some dork speculating on a computer, right? What I do know is that the albums before and after got under my skin, and this one kind of makes my skin crawl with its ungainly and difficult arrangements. The lovely live version of “You Rope You Tie Me” from Steppin’ Out suggests that the studio arrangements are the main culprit. You want “Baby I” to flow as smooth as “Warm Love” (it’s still a pretty great song) or “Barefoot And Pregnant” to jump with joy like “Show Some Emotion.” They don’t, instead limping along some of the time (“Let It Last”) or running too fast (“Taking My Baby Up Town”). You wish Joan would slow down, stop changing speeds, let the melodies breathe. The talent on To The Limit is obviously there, even if the mood is dour. But it appears the Glyn Johns honeymoon was over, and the man seems as baffled by her musical contradictions as previous producers. This might make my top 10 Joan Armatrading albums because of the creativity behind it, but top five, no.

Words and music by Joan Armatrading.