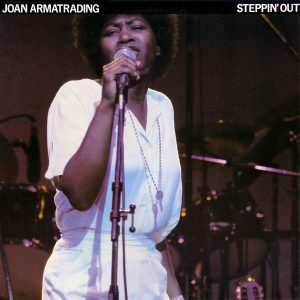 A live album recorded with yet another backing band, this time featuring Richie Hayward and Lon Price. Steppin’ Out is a little out of the ordinary: unreleased in the U.S., unencumbered with popular songs like “Show Some Emotion” or “Down To Zero.” Clearly not the concerthall compilation of classics, this is a more intimate setting, an opportunity to celebrate the early Night and happy memories from Limit, Emotion and the eponymous third nipple. Highlights include a lovingly rendered “Cool Blue Stole My Heart,” “You Rope You Tie Me” and the tender “Love and Affection.” Maybe not what you were expecting from the artist in 1979 (“How Cruel” provides a peek into the electric adventures to come), if you were expecting a live album at all. I wasn’t. Wasn’t disappointed either. Joan is softspoken on the intros, fiery during the performances and a strictly top-shelf band treats the material with care. More or less what you’d expect in terms of Joan’s tones, with no great revelation and no gaffes. Unlike the other Joni, Joan doesn’t reinvent the arrangements. “Cool Blue” steals more of the spotlight than I expected, and this version of “You Rope You Tie Me” is bound to catch your attention. The rest of them roll like I remember, played out in front of a modest North American audience, which one can only assume is some secret code for Canada. In 2006, Hip-O re-released this on CD with a new cover and no new tracks (uncharacteristically unhip for them).