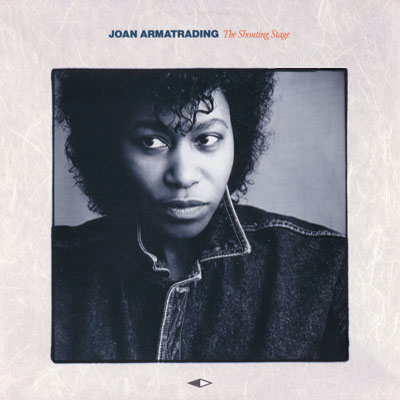 Joan enters her “mature artist phase” by exploring sophisticated arrangements rather than rocking out.

Despite its title, The Shouting Stage is one of Joan Armatrading’s most restrained albums. The opening “The Devil I Know,” with its sophisticated jazz/blues setting, lets you know that she won’t be trying to rock your socks off. Instead, Joan tickles you with the charming melodies that have always been at the core of her best work (“Living For You,” “Straight Talk”) and moves you with deep observations about the cunning art (“The Shouting Stage,” “All A Woman Needs”). The arrangements are subtle yet supple, the supporting band (featuring Mark Knopfler and a returning Pino Palladino) typically excellent.

The Shouting Stage is in many ways where you would expect Joan Armatrading to be at this stage in her career: mining familiar melodies with richer results. It’s not about the hits anymore, although if you’re looking for them, “Living For You” and “Straight Talk” won’t disappoint. It’s about quality, consistency, experience. Maybe it’s the participation of Knopfler and Alan Clark, but The Shouting Stage reminds me of the softer moments on Brothers In Arms. It flows from a natural, organic place that her last few albums didn’t in their attempt to (at least partially) please rock audiences. It isn’t an optimistic album; the lyrics are some of her darkest yet, dealing with broken trust, jealousy, being out of love. In fact, there isn’t one positive perspective on love to be found on The Shouting Stage. Yet it’s her ability to create something beautiful out of sadness and frailty that makes Joan so very special. At the same time, she continues to seek new sounds in her restless quest for idealized love, which has made the journey far more interesting for us, her traveling companions.