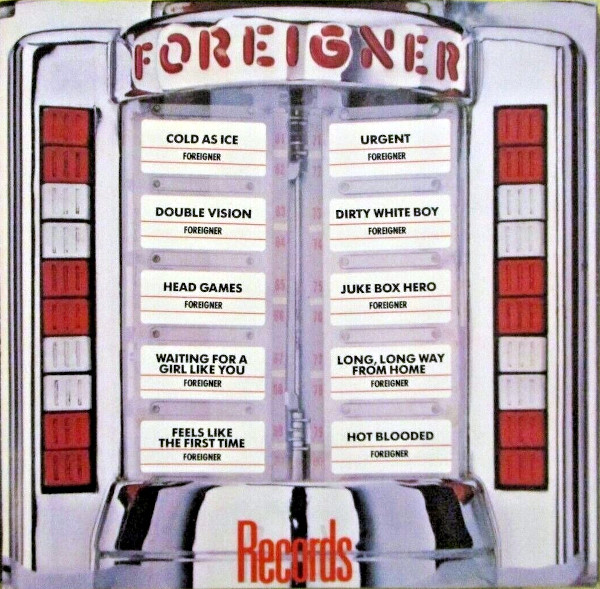 A best-of compilation that captures the band before the ballads took over.

Thirty minutes of bliss. And seven minutes of “Hot Blooded” that I’m kind of cool on. Records is the best of Foreigner, featuring all of the big singles from the first four albums. It’s rare for a label to pull the trigger after only four records when the horse is still running (cf. The Doors, The Eagles), but the best of what followed from Foreigner were ballads (“I Want To Know What Love Is,” “Say You Will”) and this album’s already got one (“Waiting For A Girl Like You”). Don’t even think of slipping another ballad on here before you add “Blue Morning, Blue Day” or “Love Has Taken Its Toll.”

I didn’t have a lot of use for Records at first because the idea of buying only one Foreigner album was foreign to me. But, I have to admit, it does get you off the hook from buying their third and fourth albums. No such amnesty for the first two; you have to buy them, right now. But here’s where Records throws you a bone: these are actually the single versions, which are slightly different than the elpee versions. In most cases, they’re just shorter, but the single version of “Cold As Ice” that opens this album is noticeably different for the addition of strings. (I actually thought about putting an exclamation point at the end of that sentence, and then I realized that most people have a life.)

Atlantic revisited the greatest hits theme in the early 90s with an ostensibly better 16-track collection; it actually drops “Long, Long Way From Home” in favor of “Women.” Records reminds us (for too brief a time) that Foreigner made some of the best music on the planet, and packaged it in some of the worst cover art. I mean, my God, they double-dipped The Doobie Brothers.